The 49th Human Rights Council has been in session for the past few weeks, discussing a variety of human rights issues from around the globe. On 4 and 7 March, the Office of the High Commissioner for Human Rights (OHCHR) presented a summary of a damning new report on the state of human rights, accountability, and rule of law in the country. Representatives of various NGOs and member states, including Sri Lanka, were then able to discuss the issues raised in that report.

Many representatives raised serious concerns about the human rights situation in the country. However, following a recent charm offensive by Sri Lanka’s Foreign Ministry, several member-states ended up parroting common government talking points about the state of human rights in the country. Most of these statements can be seen here.

Member states must not uncritically accept the claims of the Sri Lankan government, and need to hold Sri Lanka to account for its historic and ongoing human rights violations. For this reason, we have busted 5 of these myths about human rights in Sri Lanka which were heard at the Human Rights Council. 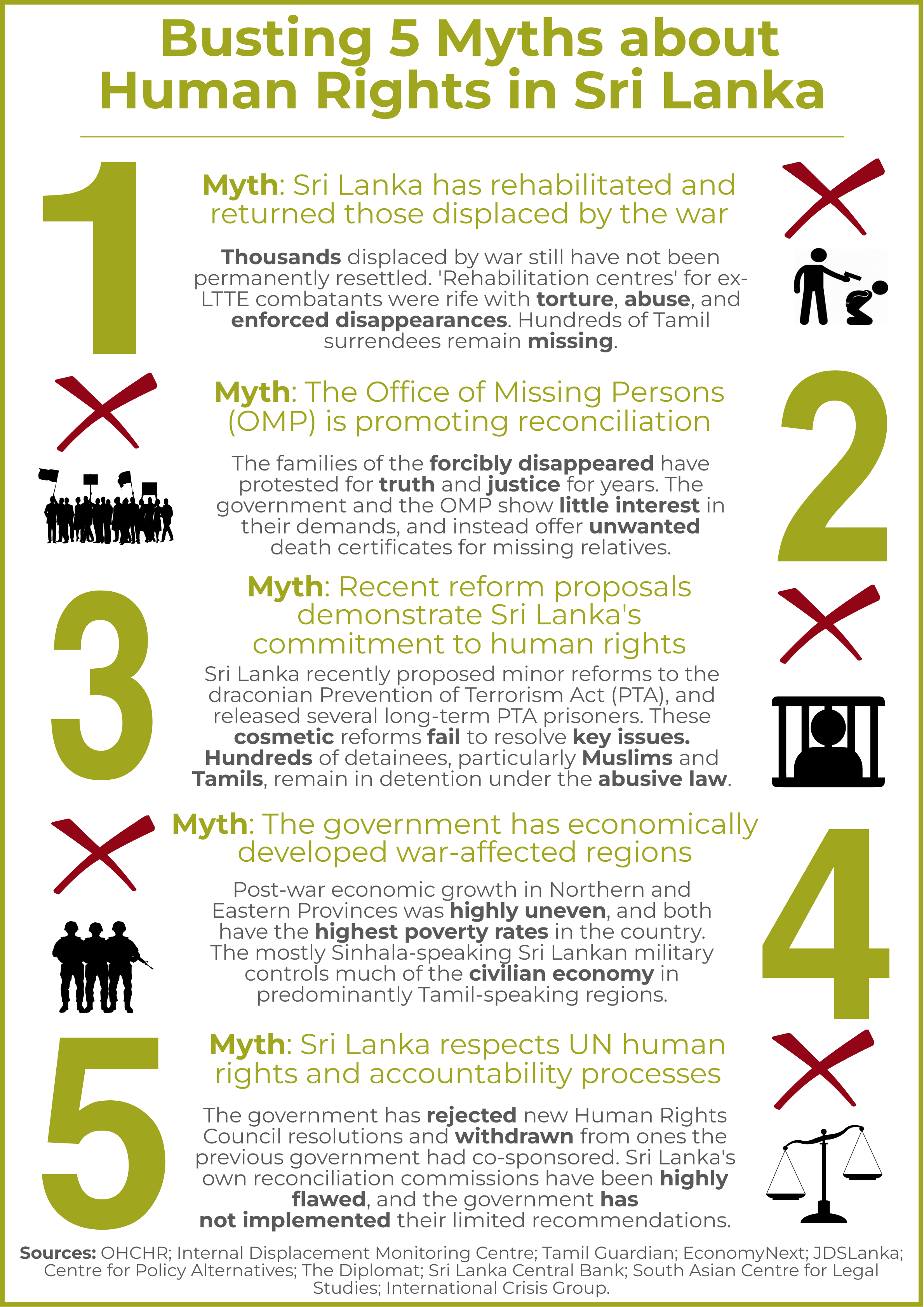 Myth #1: The government has rehabilitated and returned those displaced by the war

Venezuela’s representative claimed that Sri Lanka had ‘rehabilitated’ over 1,200 ex-LTTE combatants, showing the ‘humanist character’ of the government. Whilst some ex-combatants have been able to return home, the term ‘rehabilitation’ is highly euphemistic. The 2015 report of the OHCHR Investigation on Sri Lanka found evidence that rampant torture, sexual abuse, and enforced disappearances occurred in the government’s so-called ‘rehabilitation centres’ at the end of the war. Hundreds of Tamils who surrendered to Sri Lankan forces remain missing.

Russia and South Sudan also commended the government for allowing the safe return of Internally Displaced Persons (IDPs) to their homes. Unfortunately, as of 2021, an estimated 27,000 people were still displaced following the end of the war in 2009, and according to the Rural Labour Society of Jaffna, 800 families continued to live in IDP camps. Many of the thousands of Northern Muslims expelled by the LTTE in 1990 have also been unable to return to the North, as the government has shown little interest in resettling these communities.

Myth #2: Bodies like the Office of Missing Persons are promoting reconciliation

Sri Lanka has the second highest number of UN-registered enforced disappearances in the world. The Office of Missing Persons (OMP) was set up under the last government to investigate disappearances. However, whilst the government has been using the OMP to deflect criticism from the international community, the office itself has achieved very little for victims or their families. Families of the disappeared in the North and East, who have been continuously protesting for many years, have consistently demanded information about the fates of their loved ones, and justice for the disappearances. 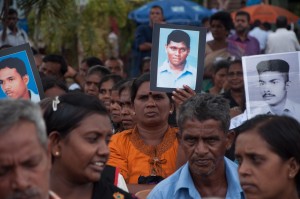 Despite their promises to the Human Rights Council, this week it was reported that the cabinet had agreed to provide death certificates, land, and 100,000 rupees (less than £300) compensation to families of the disappeared. These families have repeatedly rejected the Sri Lankan government’s offers to issue death certificates, and there has been no willingness on the government’s part to give them truth or justice.

Read more about the OMP, human rights institutions in Sri Lanka, and other issues in our latest report.

Several states congratulated the Sri Lankan government on recent conciliatory gestures, including proposed reforms to the Prevention of Terrorism Act (PTA) and the release of several PTA prisoners; the transfer of the NGO Secretariat away from the purview of the Ministry of Defence; and some limited government interaction with a few civil society representatives.

These small gestures do little to address the core human rights problems in Sri Lanka. The reforms to the PTA are largely cosmetic. While several high-profile PTA detainees were released on bail and some Tamil prisoners held without trial for years were acquitted ahead of the HRC session, hundreds more remain behind bars. Although the NGO Secretariat is no longer under the Ministry of Defence, it has instead been placed under the purview of the Foreign Ministry, which reflects the government’s continued position that NGOs represent a foreign and sinister influence. Finally, whilst there has been some dialogue between the Sri Lankan government and some civil society representatives in recent months, other activists have been arrested, surveilled, smeared, or simply ignored.

Myth #4: The government has enabled the social and economic development of war-affected and Tamil-speaking areas

After the war ended in 2009, the government did invest in infrastructure in war-affected regions, especially in the North. However, whilst the GDP of Northern Province increased at a greater rate than the national average between 2010 and 2012, this quickly slowed, and the growth was highly uneven – there remain questions as to how much it really benefitted the poorest and most-conflict-stricken communities. 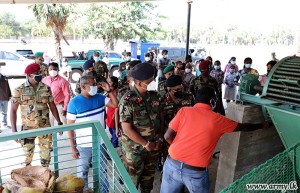 Due to the intense militarisation of the North and East, the predominantly Sinhalese armed forces control significant portions of the civilian economy, from agriculture to tourism, restricting economic opportunities for locals. The most recent Central Bank data shows that the Northern and Eastern Provinces – the regions most affected by the war – have the highest poverty rates, lowest household incomes, and the greatest poverty gaps in the country. Poverty has also decreased at a far slower rate in the North than in some of the poorest Southern provinces, such as Uva, despite this supposed focus on post-conflict development.

Whilst economic development is undoubtedly important, Tamil activists and others have long argued that this is not enough. Economic development, accountability, truth, and respect for human rights can, and should, come together.

Representatives from several countries, including Australia, Belarus, and Niger, welcomed Sri Lanka’s domestic reconciliation efforts; other states praised the government of Sri Lanka for its cooperation with various UN mechanisms, whilst criticising the passing of Resolution 46/1 in March 2021 without Sri Lanka’s consent. G.L. Pieris, Sri Lanka’s Foreign Minister, stated that Sri Lanka is a country ‘that respects international laws and conventions’ and engages actively with the Human Rights Council.

Whilst the government has worked with some UN mechanisms, such as the UN Development Programme, its cooperation with the Human Rights Council has been severely limited. As of February 2022, the government had responded to only five of nine communications from UN Special Procedure in 2021. Furthermore, the current government has not only rejected new HRC resolutions, but also has also withdrawn from those co-sponsored by the previous government between 2015-2019.  President Rajapaksa has claimed that since these resolutions were agreed to by previous government, his administration would not be bound by them. 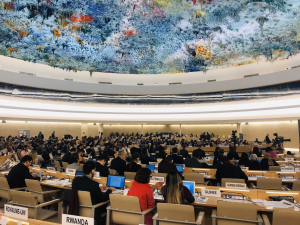 The Sri Lankan government has also done little domestically to promote accountability or reconciliation. Sri Lanka’s Lessons Learned and Reconciliation Commission (LLRC), which published a report in 2011, was heavily criticised for appearing to only consider evidence provided by the government. The Paranagama Commission was tarnished by allegations of witness intimidation and evidence tampering, and its 2015 report downplayed the government’s responsibility for human rights violations.

Whilst both commissions were highly flawed, they did make recommendations to the government on accountability, the devolution of political power, and respect for land concerns. Unfortunately, most of these recommendations have not been heeded. A Commission of Inquiry to investigate the findings of these previous commissions, established in 2021, has presented two interim reports to the President. However, these recommendations appear limited; they explicitly reject calls to repeal the Prevention of Terrorism Act, which has long been demanded by Sri Lankan civil society as well as UN human rights experts.

Successive Sri Lankan governments have totally failed to deal with human rights abuses, and the current government have shown consistent contempt for human rights and the rule of law. Member states of the Human Rights Council should be aware that the Sri Lankan government has no intention of establishing effective domestic processes or engaging with the Council in good faith. Instead, the government seeks to distract from its failures and play for time, as previous governments have done, hoping that the world’s attention will move elsewhere. States must actively challenge the misinformation presented by the government of Sri Lanka and work closely with Sri Lankan civil society to understand what is really happening on the ground.