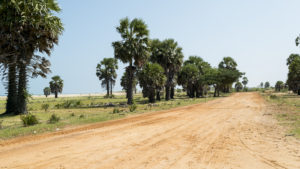 We are pleased to announce the release of our new report “the Path to Peace”. You can download a copy here.

The report is based on the testimony of nearly 300 war survivors and activists working in the north and east of Sri Lanka, and outlines their views on what would be needed to convert the current absence of war in the region into a lasting and sustainable peace. The report argues that structural violence continues to be a part of the daily lives of many in the north and east of Sri Lanka, and that if Sri Lanka’s peace is to be made permanent this must be addressed through a comprehensive reform of Sri Lanka’s security forces, by placing war survivors in positions of authority within any new processes that are established, and by the Sri Lankan government adopting a new attitude towards dealing with the past in which defensiveness is replaced by openness.

In two annexes we critique the superficiality of progress announced thus far, and provide an overview of different approaches taken by other countries around the world. 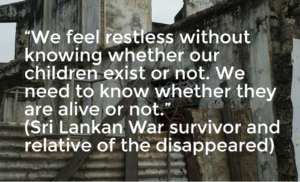 Our report comes amidst a renewed crackdown in northern Sri Lanka, with at least a dozen arrests, many of them seemingly performed in the manner of abductions, further increasing fear of the security sector and damaging trust between communities. Sri Lanka is still ranked as one of the worst performing democracies in the world for freedom of speech, and human rights violations, including over 30 instances of abduction and sexual torture linked to the security forces, persist.

Yet many in the international community seem determined to turn a blind eye to violations which do not fit their chosen narrative of Sri Lanka as a success story for international diplomacy. US Ambassador to the United Nations Samantha Power, recently made the absurd claim that “Sri Lanka has, since January 2015, emerged as a global champion of human rights and democratic accountability.” 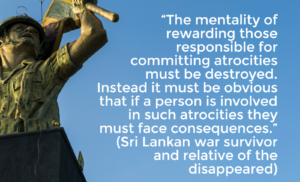 The Government of Sri Lanka and the United Nations have agreed a series of steps which should guide Sri Lanka on the road towards peace. We find that there does not appear to have been a concerted attempt to implement these steps. One step that did however take place was that a public consultation process was announced to allow organisations to submit their ideas regarding the mechanisms which will now be established to take reforms forward. Despite the short window, and concerns about witness protection many individuals and organisations did submit their ideas (including this very powerful paper on an Office for Missing Persons). The Sri Lanka Campaign have submitted this report as our submission.

As we say in the report: 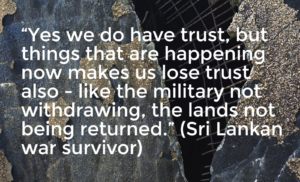 The stakes could not be higher. For several decades, Sri Lanka has endured repeated periods of mass violence, much of it ethnic in character. The victims are usually, but not exclusively, members of the non-majority ethnic population. Unless some way can be found to break these cycles of violence and the climate of impunity that sustains them then we may be doomed to repeat history.

The international community is firmly invested in this mechanism and there is little appetite for any alternative. Any new mechanism with international support could only come about after the failure of the current one, and such a failure would be hugely damaging for levels of trust on all sides – trust without which no process can hope to succeed. Thus, for all the weaknesses and shortcomings of the current process, it is at the present time still the best, and perhaps only, chance Sri Lanka has of dealing with the past. 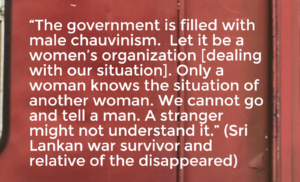 It is therefore vitally important that this process be given the best possible chance of success. The Sri Lanka Campaign has consistently argued that success requires that the views and needs of those most directly affected by the civil war – those who lost loved ones or endured violence, imprisonment and displacement – are placed at the heart of the process.

Yet we are gravely concerned that this does not appear to be happening. The time-limited approach to consultation is likely to result in many survivors being excluded. On various key issues, such as militarisation, witness protection and prosecutions, the actions and statements of intent by the government have been deeply discouraging.

Meanwhile the international community has remained focussed on the institutional elements of the UN-mandated process. We are concerned that a desire to wrap up Sri Lanka’s processes quickly has served to exacerbate the government’s tendency to shy away from taking the most politically difficult steps. 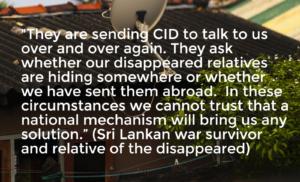 For many in the north and east of Sri Lanka the conflict has not ended and structural violence continues to be a part of their daily lives. This must end before reconciliation can be attempted. Trust must be rebuilt. Human rights abuses must cease. What is effectively military occupation of large swathes of areas needs to stop. For many war survivors, it is simply not possible to talk about “moving on” from something they believe they are still experiencing.

Yet the Sri Lankan government – and international community – seem determined to run before they can walk. They must stop, they must listen, they must improve the lives of those who lost the most. Only then, will they be able to work with those people to build a sustainable peace.