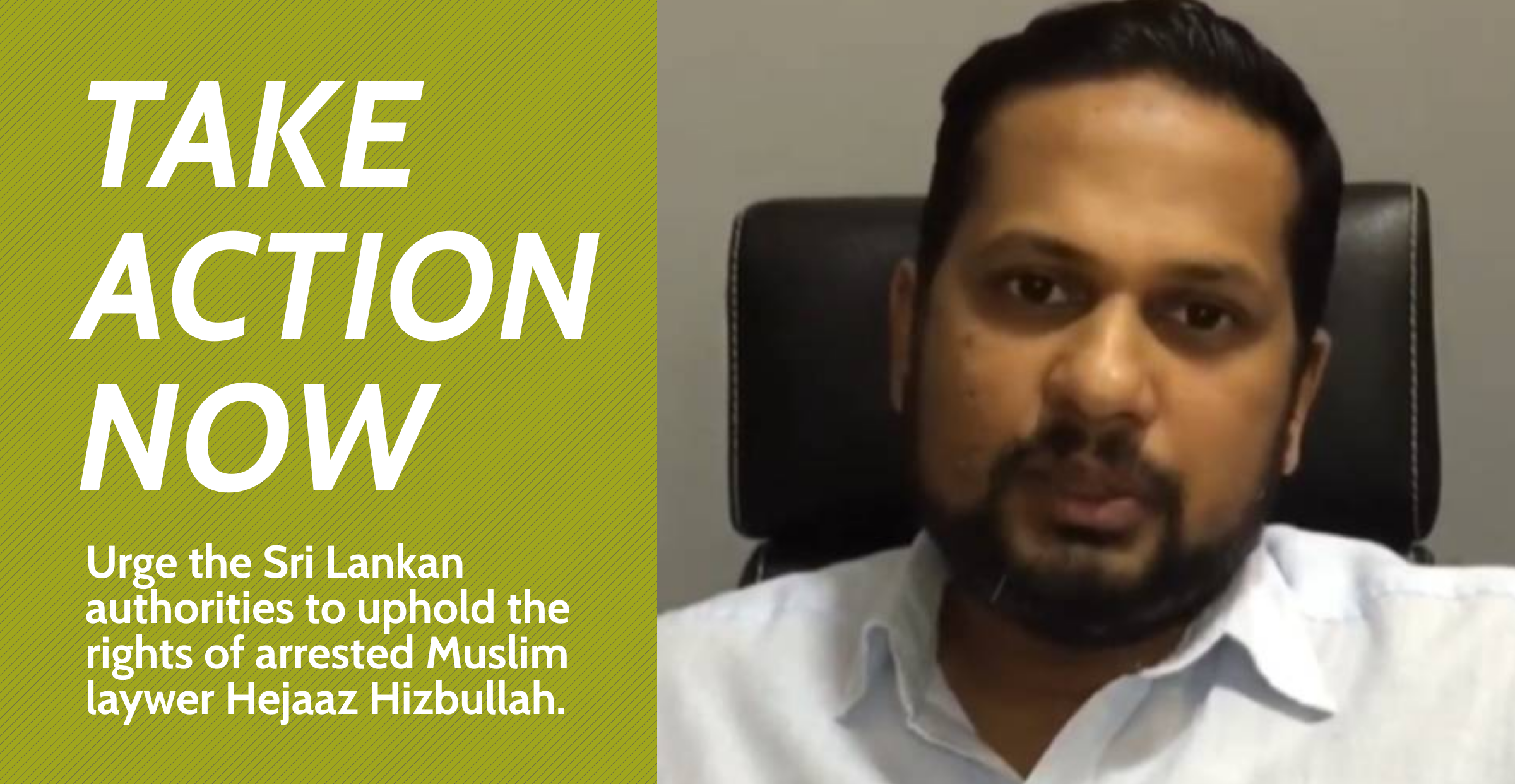 Two weeks ago, a senior Muslim lawyer Hejaaz Hizbullah was arrested by members of the Sri Lankan intelligence agencies. Two weeks on, he has not been informed of any charges, has not been granted access to lawyers, and has not been able to challenge his detention. He continues to be held by the police, in blatant violation of his due process rights under both Sri Lankan and international law.

The Sri Lankan authorities have claimed that the arrest is linked to investigations into last year’s Easter Sunday bombings. But no evidence has been produced, and Hejaaz’s family believe he has been targeted for his work, including on behalf of minority Muslims in the country.

The arrest has coincided with a surge of anti-Muslim sentiment linked to the Covid-19 crisis, with some human rights activists suggesting that Hejaaz may be being used by the government as a convenient ‘fall guy’ for a wider assault on the judiciary. Hejaaz was one of the key lawyers who appeared before the Supreme Court in November 2018 to challenge an illegal power grab by members of the Rajapaksa family. There is speculation that his recent arrest could be a warning shot designed to deter any further legal challenges to planned Parliamentary elections in Sri Lanka; elections which President Rajapaksa appears intent on forcing through as soon as possible, despite concerns about the ongoing public health crisis and its potentially serious impact on the integrity of polls. This week, leaders from almost all of Sri Lanka’s opposition parties issued a statement raising concerns about the possibility of elections being held amid the current crisis, and urging the immediate re-convening of Sri Lanka’s currently dissolved Parliament.

It has been reported that Hejaaz was arrested under the Prevention of Terrorism Act (PTA), a draconian piece of legislation which has been used by successive regimes to stifle dissent. Despite promises by the previous government to repeal and replace the PTA – promises which enabled Sri Lanka to obtain access to the EU’s “GSP+” preferential trading scheme in 2017 – the legislation remains in place, and continues to be used to harass and threaten critical voices on the island.

Please take action today to help ensure that Hejaaz’s due process rights are respected, and that his arrest does not mark the start of a wider attack on Sri Lanka’s legal community. You can do so by writing to Sri Lanka’s Acting Inspector General of Police (IGP) – by email or post – using this handy template letter produced by Amnesty International as part of an urgent appeal which they have launched.

Further information and statements about Hejaaz’s arrest can be found at the links below.

“Mr Hizbullah is of the firm view that his arrest is illegal and arbitrary and has been done for collateral purposes, with the intention of stifling dissent.” – Hejaaz’s family

“No one questions the government’s need and obligation to investigate the horrendous Easter Sunday attacks, but these investigations must be conducted in a way that is consistent with international law and the Sri Lankan Constitution. Not serving Hizbullah a remand order as required by law, and denying him full and confidential access to legal counsel is unacceptable and in violation of international standards on the right to liberty.” – Frederick Rawski, ICJ Asia-Pacific Director

“The most troubling aspect … is that CID officers had allegedly accessed two case files of Mr Hizbullah, which is a severe impingement of attorney-client privilege. Such blatant disregard of the due process rights of an officer of the Supreme Court … [has] a chilling effect on all legal professionals in Sri Lanka.” – collective citizens statement.