Tales from the front line

“Every journalist has heard of Srebrenica. How many have heard of Mullivaikkal where just as many perished?”

This is the sobering question that Frances Harrison, former BBC correspondent asks in her upcoming book “Still Counting the Dead”. 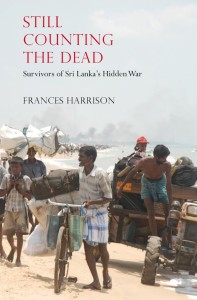 In it the veteran journalist, who has worked in Bangladesh, Malaysia and Iran, recounts the stories of survivors from the end of the Sri Lankan civil war in 2009, capturing the agony of civilians caught in the crossfire between the Sri Lankan army and the Tamil Tigers.Estimates of the number of people killed during this period vary drastically depending on who is giving the estimate, but the most reliable figures suggest 40,000 people died in the closing stages of the war.

It can be difficult to visualise or comprehend the meaning of such stark statistics, but by presenting individual stories and the faces behind the numbers, Harrison gives the conflict a human side and displays her skills as a journalist and as an excellent storyteller.“A medic saw a baby born with a bullet lodged in his tiny leg, shot while still in the womb. In the makeshift hospitals dying mothers screamed for their babies to give them one last feed – knowing the breast milk would be their last gift of life.”In addition to reliving the trauma of individuals caught in the war,

Harrison admonishes the reaction of the international community and media both at the time of the violence and subsequently; they claim the conflict was “a war without witness”, which prevents them from punishing the perpetrators or properly investigating what happened.

Harrison refutes this ‘war without witness’ label, saying that despite the Sri Lankan government’s attempts to bar journalists from entering the war zone, there were many people who witnessed the escalating conflict, including 60 Catholic priests and nuns, 240 local NGO workers and Tamil civil servants. Then there are the survivors of the war, who have been left traumatised, having lost loved ones and their possessions and currently living in a country which continues to persecute and suppress them.

They are still alive and their testimonies serve as the best, and most honest, evidence of the brutality perpetrated by both sides in the conflict. Harrison recounts civilians’ living in fear during the closing stages of the war; fear of being fired upon by indiscriminate government rockets and the fear that Tami Tiger soldiers would steal their children to make them fight against the army.

Harrison’s rebuke of the international community and United Nations is strong. She says the UN “failed utterly in its duty of care” but her most stinging criticism is reserved for those in her profession.

She says that journalists failed to scratch the surface of a supposedly impenetrable war. Unlike in Syria, where journalists were willing to smuggle into the country to report on the situation, there was no one to do the same in the north of Sri Lanka, despite there being an erratic bus service to the frontline. International media missed vital testimonies and ignored the war, focusing on other news stories such Gaza, where 1,500 people died at a time when a human catastrophe, killing up to 40,000 people, was unfolding in Sri Lanka.

Well-researched and with an eye for detail, Harrison’s book is essential reading for those wanting to know the human stories and faces behind the war. When we published eight survivors stories this may they were among the most read articles we ever published but Frances’ stories are different, in fact most of them have never been heard before. They may have been neglected by the international community and media but their powerful memories live on.

Frances Harrison’s book “Still Counting the Dead” will be released in October, and is available to pre-order through Amazon. By using the link below, 5% of proceeds go to the Sri Lanka Campaign for Peace and Justice. There will a Tamil translation, and an English Rupee edition coming out later in the Autumn. We will be making a Sinhalese translation freely available on this website as soon as the book is out.

If you are in Canada you can order the book here