Below we re-publish in full a recent statement by Reporters Without Borders (RSF), which follows a sustained pattern of harassment and intimidation against Tamil journalist, Uthayarasa Shalin. The Sri Lanka Campaign joins RSF and others in calling for an immediate halt to this coordinated attempt by Sri Lanka’s security agencies to muzzle a member of the press. We urge members of the international community to intervene to ensure Shalin’s safety and protect his journalistic freedom.

Reporters Without Borders (RSF) calls on the Sri Lankan authorities to end the harassment to which the Terrorist Investigation Division (TID) is subjecting an independent Tamil journalist, Uthayarasa Shalin, on entirely spurious grounds.

Based in the northern city of 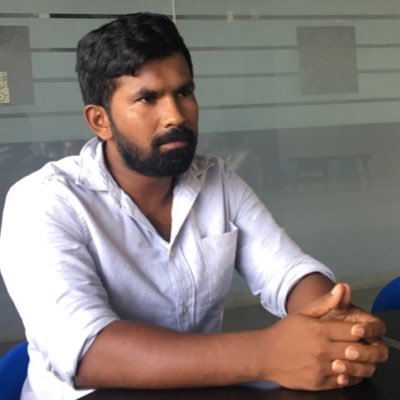 Jaffna, where he reports for the English-language Tamil Guardian and the Tamil-language newspaper Valampuri, Uthayarasa Shalin has been the target of harassment and intimidation for the past two months, ever since he was summoned for questioning at TID headquarters in Colombo on 22 August.

The TID interrogated him about his coverage of a completely innocuous annual festival in a Hindu temple in June for Valampuri and, in particular, about a photo taken inside the temple in which a map of the traditional Tamil homeland in the north and east of the country could be seen in the background.

Although Shalin had no role in the organization of the festival or the temple’s decoration, this apparently insignificant detail has been the grounds for the harassment to which he has been subjected ever since.

He was not allowed to bring his lawyer to the first interrogation, which seemed more like a long series of threats. His interrogators said, for example: “If this had happened two years ago, we wouldn’t have questioned you like this, we would have hung you upside down and then made you disappear.”

Ever since then, Shalin has been the target of constant harassment by the police in Jaffna that has included arrests and insults. The acts of intimidation have increased this month, with five of his friends and relatives being summoned for interrogation by the TID, including his brother Jelsin on 17 October.

“We call on the Sri Lankan authorities to put an immediate stop to this harassment of a journalist who is universally respected for the quality of is reporting and his coverage of human rights violations,” said Daniel Bastard, the head of RSF’s Asia-Pacific desk.

“These acts of intimidation, which are clearly designed to silence Uthayarasa Shalin, recall the worst period of persecution of Sri Lanka’s Tamil journalists. The government in Colombo must demonstrate a determination not to return that disastrous past.”

According to RSF’s press freedom barometer, at least 15 journalists were murdered in Sri Lanka during the 2000s, a terrible decade in which fighting intensified between government forces and Tamil rebels and the rebellion was finally crushed in 2009. Most of those murders are still unpunished.

RSF will tomorrow publish the findings of its Media Ownership Monitor survey of Sri Lanka, which is ranked 131st out of 180 countries in RSF’s 2018 World Press Freedom Index.