Tea tourism in Sri Lanka: what shape should it take?

A guest post from Nikhil Subbiah, who recently spent several months researching plantation communities in estates in Sri Lanka and Assam as part of Churchill fellowship. 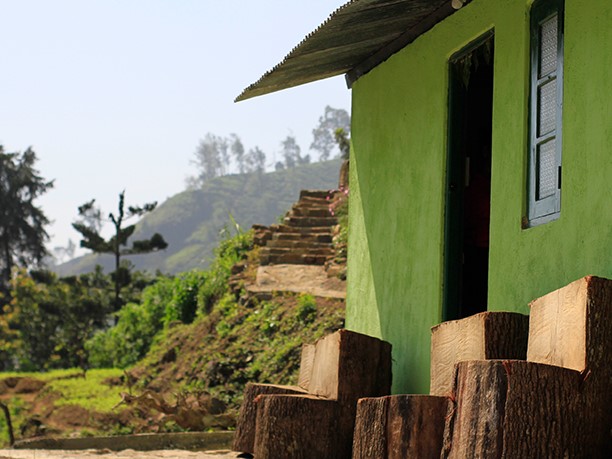 The ‘line room experience’ as sold…

In June, a site of tranquillity became one of controversy when the owners of Warwick Garden Hotel, a picturesque Edwardian-style planters[1] mansion in the heart of Sri Lanka’s tea country, announced a new offering to its visitors. The Meena Amma ‘line room experience’ was, according to the website of parent company Jetwing, a concept that had been designed to provide tourists with an opportunity “to immerse [themselves] into the lives of Sri Lanka’s iconic tea pluckers” – an effect to be achieved through a stay in the newly refurbished home of a former tea estate worker, Meena Amma, in a sort of rustic, ‘back-to-source’ experience bringing the consumers of tea closer to the world of its producers.

The announcement was picked up by various human rights activists, many of whom argued forcefully and cogently on social media that the ‘experience’ not only sanitises two centuries of oppression and trauma, but also minimises the appalling conditions which Sri Lanka’s tea pickers continue to endure to this day. Based on my own exploration of this issue last year, during which I visited a number of estates in Sri Lanka and Assam as part of a Churchill Fellowship, I reflect on some of those arguments here – and suggest that, while there is and should be scope for sensitive and ethical forms of ‘tea tourism’, Jetwing’s latest attempt at it appears to be wide of the mark.

The tea pickers of Sri Lanka, much like their cousins in India, are some of the most disadvantaged peoples in South Asia today. They form part of a wider web of ‘indenture’ – a term used to describe the bonded contracts to which they were subjected by colonial planters – that stretches from Guyana to Fiji, and which includes places like Mauritius, Kenya and South Africa.

Having been brought from South India to pick tea as a source of unfree labour by the British from the early 19th Century onwards, the ‘up-country Tamils’[2] – as the ethnically Tamil and Tamil-speaking labourers who make up the overwhelming majority of Sri Lanka’s tea labour force and 4.2% of its total population are known – remain one of the most deprived subsets of people in modern Sri Lanka. A 2017 article summarises in simple and clinical terms the problems facing these people: 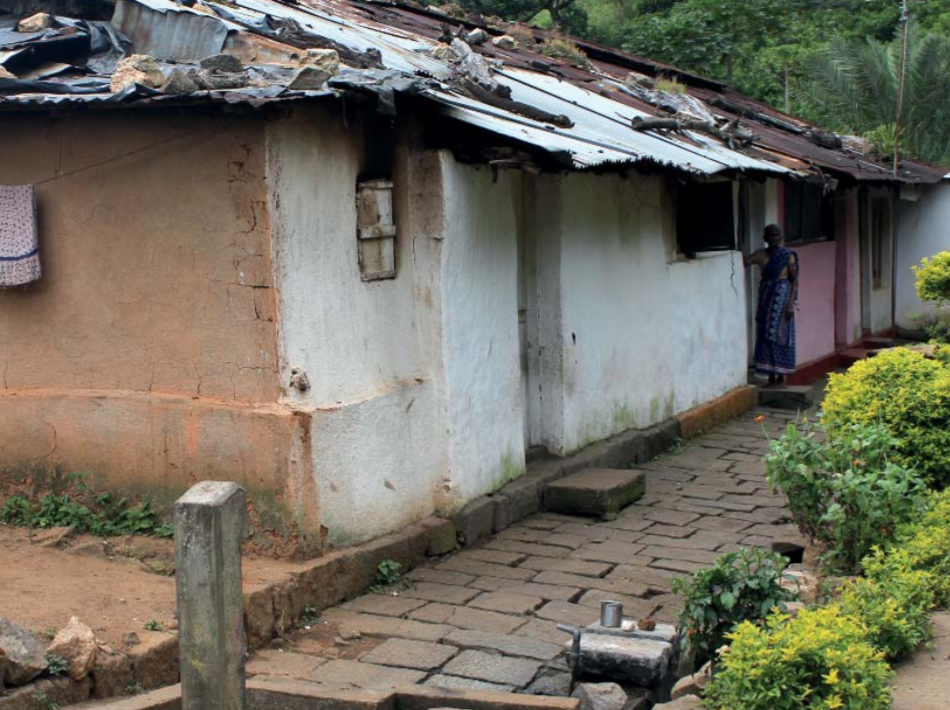 …and the line room experience as lived.

“Until recently, many hill-country Tamils were not entitled to vote. Laws passed after Sri Lanka became independent from Britain in 1948 stripped them of citizenship. Subsequent repatriation agreements saw large numbers deported to India without their consent. Sri Lanka eventually granted citizenship to the rest, but only in stages. Some 300,000 were stateless until 2003—with an “X” on their identity cards to highlight their lowly status.

The mean income among estate workers is a quarter less than that of other rural labourers. Some 11% of hill-country Tamils are poor, well above the national figure of 7%. More than half drop out of school by the age of 15. Only 2% pass any A-levels, exams taken at the age of 18, compared with 11% among other rural pupils.”

These problems are significant by any measure. It should go without saying that such problems should not be trivialised. It is unfortunate then that the Jetwing’s recent venture, well-intentioned as it may be, achieves just that; suggesting as it does that a night’s stay in a well renovated property on the grounds of a luxury hotel is emblematic of the daily grind of a tea worker in contemporary Sri Lanka.

The obvious point here is that there is no such thing as an authentic ‘line room experience’ that is not the actual experience of a person who lives in a line room. For many tea workers in Sri Lanka today, that is an experience which entails extraordinarily cramped living conditions, an appalling lack of access to sanitation and clean water, and various other visible manifestations of severe poverty ranging from alcoholism to domestic violence. At best Jetwing’s latest offering is tone-deaf; at worst it is a disturbing whitewash of an ongoing social injustice and the legacy of a particularly dark chapter in South Asian history.

A Brief History of Displacement

Given the apparent/shocking lack of awareness on the subject, here’s a primer. Think twice before you endorse this nonsense, dress up like a tea plucker for your next instagram post.

Tourism, provided it can benefit local communities, is undeniably a good thing. Visiting Sri Lanka and Assam last year I was struck by how archaic and feudalistic the system of labour was; and how tourism might hold the potential to diversify livelihoods and provide a new stream of income for those most in need. Given the worldwide popularity of industry tourism there is every possibility that up-country tourism could form an integral part of the island’s overall tourism economy. There are precedents elsewhere of the rise of ethical, grassroots ‘industry’ tourism, such as in the coffee-growing sector, and there is no reason why it would not work just as well for tea, especially at a time when Sri Lanka is seeking to boost its tourism revenue.

It is crucial, however, that this opening up of Sri Lanka’s ‘tea country’ to tourism coincides with a more sensitive and thoughtful approach to its tea pickers – one which recognises their history, agency, and the contemporary problems that they face. Obviously, this challenge is not Sri Lanka’s alone. There are many examples around the world of problematic attempts to marry tourism with the experience of marginalised people, ranging from plantations in the American South that promise guests a night in a sharecropper’s shack, guided tours of urban slums, and tour-operated ‘tribal homestays’ in far flung corners of the world that commodify threatened cultures and communities in exchange for the dollars of  iPhone toting Instagram users.

But there are also many examples of tourism ventures that resist falling into these traps. The American South has a growing presence of anti-slavery museums that sit side-by-side with its plantations. Museums such as the Whitney Plantation provide a sobering but educational reminder of the dark underside to the colonial beauty of many plantations. And there are numerous examples, the Maasai in Kenya for instance, of local tribespeople banding their resources together to generate livelihoods from tourism on their terms.

Following the outcry on social media, the Chairman of Jetwing, Hiran Cooray, issued a written response that attempted to address the concerns raised. His reply focussed largely on the views and wishes of Meena Amma herself, the Jetwing employee and former tea-worker at whose request the ‘line room experience’ was apparently undertaken by the company.

Ayubowan everyone – thank you for all your comments and tweets regarding Meena Amma’s Line Rooms. We feel that there are some clarifications that need to be made with regard to the experience, which comes via Hiran Cooray in the message attached. pic.twitter.com/zInrzwxZfa

On the face of it, the letter reveals a degree of genuine good-intent on the part of a company with a creditable record of ethical practise. Yet, in dismissing as “sensationalist” the issues raised by critics, the response fails to acknowledge, engage or respond meaningfully to them. And these legitimate criticisms – and the wider social problem which underpins them – are not simply negated or rendered inadmissible by showing that the company had at heart the intentions of one of its workers and a member of the affected community.

Claiming this to be an authentic/immersive experience into a tea plucker’s life when it is realistically never going to be so is both misleading marketing & erasure of the issue beyond Meena Amma’s story. The real issue here.

Another of the arguments in Mr Cooray’s response sticks out as particularly troubling:

As the old saying goes, “it is better to light a single candle, than curse the darkness”- our company is not a tea producer or processor, and as such we do not have the capacity to impact widespread change; I can only hope that others follow in the practices we have implemented at our small estate and bring enough light to eradicate the darkness.

With respect to Mr Cooray, that is a gross dereliction of the duty owed to the local communities in which his company is embedded and upon which it depends. Jetwing is one of Sri Lanka’s largest hotel chains, and the sum of its 20 hotels and 10 villas is much more than the ‘small tea estate’ that Warwick Gardens represents. It is a Sri Lankan institution. It is simply not good enough for a company to profit from the positive imagery of the tea industry and then hope that others do the hard graft of bringing to light its dark underside. We should all ask for much much more from organisations such as Jetwing, and the steps they could take need not be extravagant or disproportionate either.

Why not, for example, work with current tea workers to create an information centre about the history of the up-country community and their contemporary experience? For the cost of some photographs, signage and furniture (a fraction of Warwick Gardens’ annual profits, let alone Jetwing’s) one could create a sensitive memorial to the labourers of Sri Lanka’s hill-country, and provide the scores of tourists who visit each day with some meaningful insights into the lives of local people. Another idea would be to donate a percentage of profits deriving from its tea-related ventures to organisations working to uplift the rights of tea workers – or, even better, directly to communities themselves.

Some of the larger estates provide a measure of corporate social responsibility to their workers. Though their schemes are by no means perfect, and represent the bare minimum currently being provided in this sector, they are still better than Jetwing’s current offering to plantation communities. Why not implement some of their ideas and, if this is already being done, put them front and centre of its marketing materials?

Looking to the future

Small initiatives play a significant role in shaping the way in which the tea industry in Sri Lanka is perceived by the outside world. Given the embryonic state of tourism in the up-country, it is doubly important that future initiatives help address the problems faced by tea workers today. Underpinning this is a serious debate about the future shape of up-country tourism. It can either gloss over the troubling dimensions of tea-picking, past and present, or it can elevate them without sanitising it – and trust that those who come to learn more about the industry will continue to do so with a fuller and more profound understanding of the underlying issues.

Want to know more about this issue?

Then check out this recent piece on the Meena Amma ‘line room experience’ published in Himal Southasian.

We also recommend taking a look at this recent photo essay, published by the Centre for Policy Alternatives, as well as our resource pack on the conditions faced by plantation workers today.

The Human Development Organisation – a grassroots human rights group working to strengthen the rights of Sri Lanka’s tea workers  – have also produced a range of in-depth reports which can be found on their website.

[1] The colloquial term for a tea estate manager or owner.

[2] As with many groups, the appropriate nomenclature has been a source of disagreement and tension. Here I have adopted the most widely used terminology, ‘up-country Tamils’, but the group is also sometimes referred to as the ‘hill-country Tamils’, ‘Indian-origin Tamils’ or ‘Malayaha Tamils’.