The Island Nation is a new play about the Sri Lankan civil war which will run at London’s Arcola Theatre from the 26th of October to the 19th of November. We recently sat down with the playwright, Christine Bacon of ice&fire, and asked her a few questions: 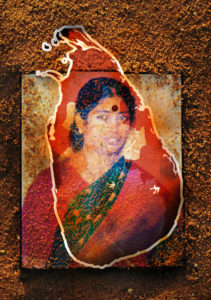 Why did you write this play?

I have run a theatre company that explores human rights stories for almost ten years. I read the international pages in the newspapers. I try to keep as informed as possible about significant developments in the human rights sphere. My best friend went to Sri Lanka on holiday in February 2009. I had written a play called On the Record which looked at press freedom, including in Sri Lanka. But I had never heard of Mullivaikkal. I had no idea about the extent of human suffering in the north of Sri Lanka at that time. It completely passed me by. And if it passed someone like me by, then, the logical (and I think correct) conclusion was that it passed the vast majority of people by. Frances Harrison asked me to read her book Still Counting the Dead and suggested I write a play about the end of the war. After reading her book, I agreed, on the very simple basis that when something of this magnitude happens, people should know about it.

The play focuses largely on the final stages of the war and looks at it from a number of different angles and viewpoints. What is your take on the actions of key players in the lead up to the events of 2009?

My take as an individual and what could be termed an ‘informed observer’ is very different to the various opinions expressed in the play.  We presented a reading of the play at the Southbank Centre in 2014 and it was difficult for the audience to separate my own individual response to these events from what some of the characters say in the play. The play is 90 minutes long and is primarily aimed at a general audience who, on the whole, will come to the theatre knowing nothing about Sri Lanka beyond vague associations with tea, cricket and beach holidays. So, it is a necessarily superficial look at what happened there and allows a variety of views to be heard, as any good play should.

That said, the play highlights: some of the grave crimes committed, such as indiscriminate shelling of civilians, including within government declared no fire zones; the behind-the-scenes story of the UN’s role at the time; the plight of civilians trapped in the war zone; and the role of the Norwegian-led peace process. It is not a partisan play, in that I don’t think it sides with one viewpoint over another, but instead, aims to shed light on crucial issues that are important to all Sri Lankans and should also be considered important by the wider public.

Why is this important now?

Apart from the fact that this is a story that still remains largely unknown, it is important now because the picture of Sri Lanka in the public imagination largely remains of a small island which is now at peace and is a good tourist destination. So, like many such events, it takes time for the truth to properly emerge and this play is my small contribution to that.

At the end of the play, there is a nod to the fact that the human rights violations did not stop once the war ended and that Tamils have been leaving in their thousands to seek asylum abroad post 2009 and even after the establishment of the new government last year. As an artist, I have worked in therapeutic organisations here in London and have met many Sri Lankan Tamils who have suffered horrific abuses at the hands of the Sri Lankan state and have been refused asylum by our government. I recently finished a project with Freedom from Torture and discovered that Sri Lankan Tamils, to a staggering degree, form the largest percentage of their case load and have for many years since 2009.

The Island Nation runs at the Arcola Theatre in Dalston from October 26 – November 19. Tickets can be booked here.

Post-show events will be announced closer to the opening date . Keep your eye on the Arcola website for updates or sign up to ice&fire’s newsletter via www.iceandfire.co.uk. One has been announced already:

Post-Show discussion on 3rd November 2016:
Sri Lanka: Then and Now
Journalist Frances Harrison, author of Still Counting the Dead and Ann Hannah, International Advocate and Researcher at Freedom from Torture, will discuss the legacy of the events of 2009 and the ongoing human rights violations at the hands of the Sri Lankan military and security services. Freedom from Torture provides direct clinical services to survivors of torture who arrive in the UK, as well as striving to protect and promote their rights. For many successive years, Sri Lankans have comprised the largest proportion of their caseload.

ice&fire are also running a crowd funder. Anyone willing to support them get this play to the stage can do so here.