We hereby release our media resource pack for the release of the “OISL” UN investigation in Sri Lanka, due to be published on Wednesday.

Our pack is available here.

We have also prepared a list of people willing to be interviewed after the report is released. Please email [email protected] for comment.

Here is an infographic, which you are welcome to share, demonstrating how many Sri Lankans went missing  in the aftermath of the civil war. 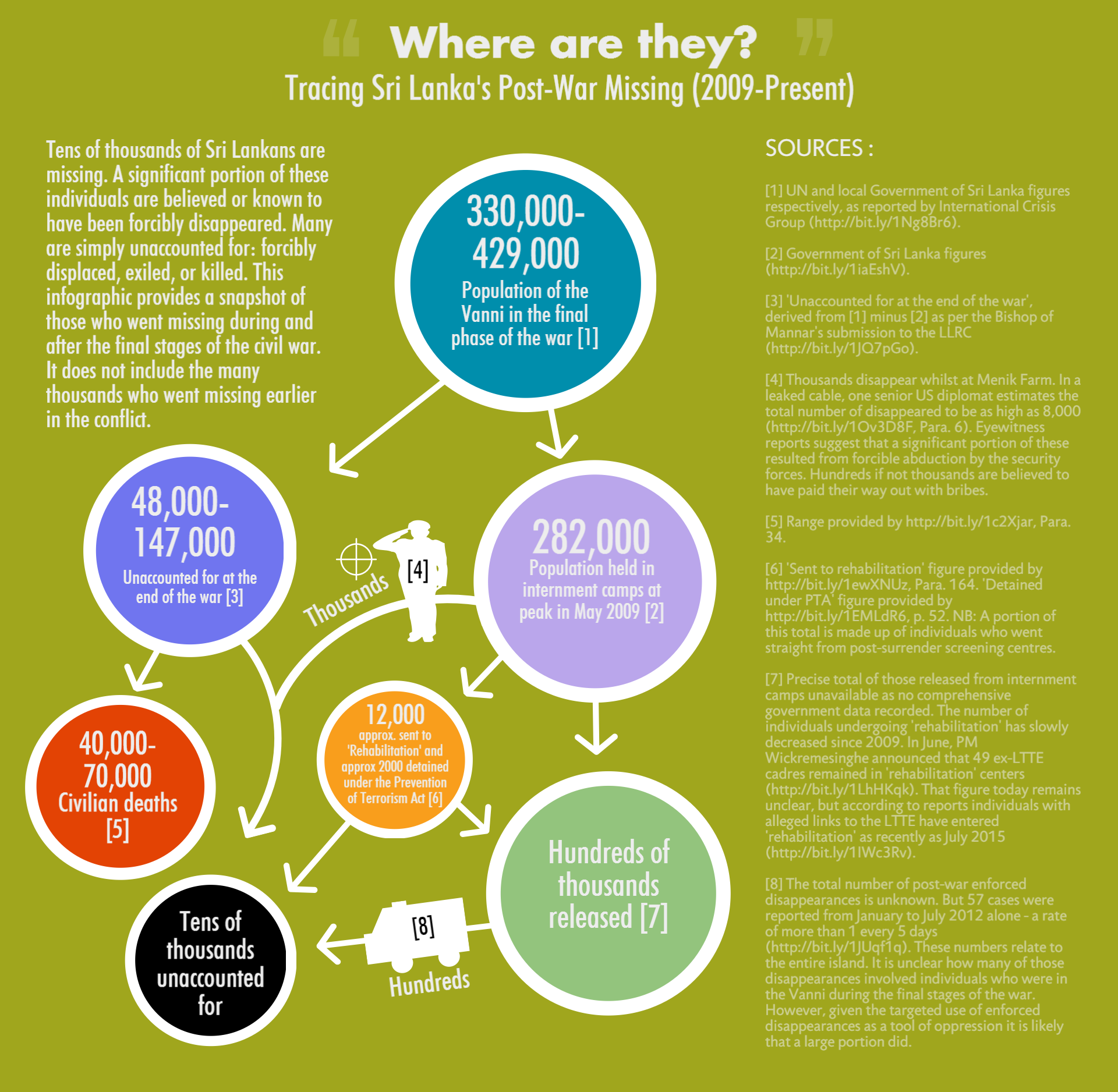 “This report has been made possible by the testimony of survivors of Sri Lanka’s civil war living inside and outside of Sri Lanka. They have given this testimony at great personal risk. The country, and the international community as a whole, owes them a debt of gratitude for helping to establish a clearer picture of some of the worst mass atrocities to have taken place in this century. More importantly, we owe it to them to implement their wishes and this report’s recommendations.

“There is now no doubt that war crimes and crimes against humanity were committed by both sides of Sri Lanka’s civil war, and that many of the tens of thousands of civilians who died in the early months of 2009 were murdered by their own government. The single most positive step the new Government of Sri Lanka could make is to accept this basic truth. An apology must surely follow.

“The Liberation Tigers of Tamil Eelam (LTTE or Tamil Tigers) also committed atrocities and have the blood of thousands of innocents on their hands. While very few members of the LTTE’s senior leadership survive, those who played a part in supporting their work, or who by their silence allowed them to go unchallenged, should also acknowledge the LTTE’s brutal actions and apologise.

“With tens of thousands dead or unaccounted for, 2009 saw the worst violence Sri Lanka has ever seen, and most of the victims were Tamil. Sadly, this tragedy is part of a wider pattern of mass violence in Sri Lanka, which has resulted in the deaths of tens of thousands of people from all ethnicities, but particularly Tamils, over many decades. While some of the worst episodes have prompted domestic inquiries, these government-led investigations have been highly compromised, producing few outcomes and virtually no arrests.

“The only way to end this cycle of violence and to build a lasting peace in Sri Lanka is with prosecutions that will break the prevailing culture of impunity. The survivors of Sri Lanka’s civil war have made it clear that these prosecutions must be led by the international community.”