The Pope is due to visit Sri Lanka on January the 13th. A presidential election will be held there only five days before he arrives – something the Vatican had indicated it would consider “inappropriate”. 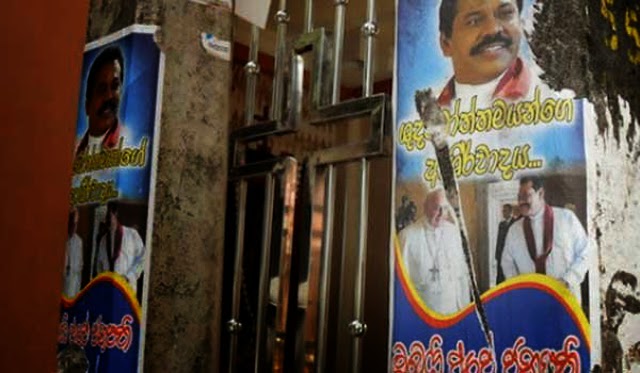 Already the Pope’s visit is being used politically: his picture appears alongside that of the incumbent President Mahinda Rajapaksa in posters stuck on lampposts all over Sri Lanka. The local Catholic church has objected to the use of the Pope’s image in this way, but many in Sri Lanka feel there is something disingenuous about that call: this visit was the brainchild of Cardinal Malcolm Ranjith, the Archbishop of Colombo and a close ally of President Rajapaksa, and there had always been a feeling that it would be used to bolster support for the regime. The timing of the election has now made this exploitation of the visit more flagrant, and perhaps too transparent for the Vatican’s liking. 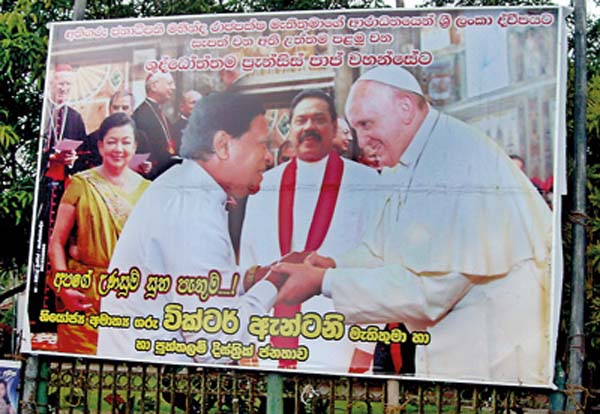 Even at this late hour, the Pope should reconsider whether a visit to Sri Lanka at that time would really be in the best interests of Sri Lanka’s people. His visit is being abused for political purposes, and will continue to be so unless it is deferred. Furthermore, given the traditionally high levels of electoral and post electoral violence in Sri Lanka, four days after a presidential election might not be the most safe or stable time to visit the island.

Sri Lanka’s catholic community is small, only around 6% of the population. But it has generally punched above its weight in the island’s affairs . The current President’s wife is a catholic, as are many senior figures in the government. Catholicism is also the only religion that spans, to a significant extent, the ethnic divide between Sri Lanka’s Sinhalese majority and the Tamil minority in the North – the latter being the primary victims of the civil war that has dominated Sri Lanka’s last three decades.

This places Sri Lanka’s catholic community in a unique position to build bridges across the nation’s ethnic faultlines. Sadly, however, few members of the Church hierarchy have shown a willingness to do so; most have been disappointingly silent about the many appalling violations of human rights committed by both sides. By contrast, many lay catholics and parish priests have, despite this lack of leadership, fought ceaselessly for the rights of the oppressed. Often they have paid a very high price for this: Fr Jim Brown, Fr Francis Joseph, Fr “Kili” Karunaratnam and Fr. Pakiaranjith all lost their lives as while working to protect civilians during the war.

More recently, two more prominent Catholics – Fr Praveen Mahesan, a Catholic priest and Oblate of Mary Immaculate, and Ruki Fernando, the former Asian coordinator of the International Young Christian Students Movement and former coordinator of the National Peace Program of Caritas Sri Lanka – were arrested and briefly detained as a result of their work on disappearances.

Many Tamils disappeared, and were almost certainly murdered, after surrendering to the authorities at the end of the civil war in 2009. Two years later a report by the “Watchdog” human rights group suggested that one person was still disappearing every five days, and that is probably still true. Invariably the disappearances are political, and the government or its agents are the prime suspects. Such disappearances in Sri Lanka are nothing new. Nowadays they mostly affect the war-torn Tamil north, but there are enough unresolved historical cases dating from Sri Lanka’s “JVP” Marxist insurrection in the south in the 1980s to make Sri Lanka second only to Iraq when it comes to outstanding cases before the United Nations’ Working Group on Enforced or Involuntary Disappearances.

One of those who disappeared when he surrendered to the Sri Lankan army in 2009 was Balendaran Mahinthan. Since then his face has only been seen once, in a photograph in a Government brochure regarding their rehabilitation programme. Yet despite this clear indication that he was – at one point – alive and well and in Governmental custody, there is now no trace of him.

On March the 13th this year Mahinthan’s mother, Jeyakumary Balendaran, was detained. It was her detention that Fr Praveen and Ruki Fernando were trying to investigate when they were themselves detained two days later. But while their detention provoked a major international outcry, and they were released after two days, Jeyakumary herself is still interned, more than 250 days later, in Boossa detention centre, a place where torture is known to be used systemically against detainees – and the authorities have yet to produce even a shred of evidence to implicate her in any wrongdoing. Her continued detention is a stain not only on Sri Lanka’s reputation, but also on that of the Catholic Church – for while many brave local catholic activists have spoken out for her, the senior hierarchy of the church has not. And once the two prominent catholic activists were released the international outcry quickly subsided: apparently the fate of a Hindu woman does not cause the same concern.

If the Pope’s visit goes ahead, he can redress this failing by speaking out strongly, on this issue and on the many others where Sri Lanka needs a strong moral voice. His challenge will be to show in words and symbolic deeds that he sides with Sri Lanka’s victims – Tamil mothers of missing children and murdered relatives, Muslims who have had their homes burned down by nationalist mobs, and the families of Sinhalese journalists critical of the regime who have also disappeared.

Sri Lanka is rapidly starting to resemble a time and a place that the Pope will find very familiar: Argentina during Operation Condor. Those within the church who emerged from that time and place with credit were those who were willing to speak out for the victims, whether Catholic or not. That much will not change.

Edward Mortimer, a Distinguished Fellow of All Souls College, Oxford, chairs the Sri Lanka Campaign for Peace and Justice. From 1998 to 2006 he served as Chief Speechwriter and Director of Communications to UN Secretary-General Kofi Annan.