The response to Kumar Sangakkara’s lecture

Never has the link between cricket and politics been so evident and so alarming in the history of Sri Lanka as when one reflects for just a moment on the 2011 MCC Spirit of Cricket Cowdrey Lecture, given by former Sri Lankan Cricket Captain Kumar Sangakkara, on 4th July 2011. Sanga became the first Cowdrey lecturer to receive a standing ovation since Desmond Tutu in 2008. The very next day, the Sri Lankan Minister of Sports ordered a report into the very address that won him the praise of a distinguished audience at Lords and plaudits from the international media. 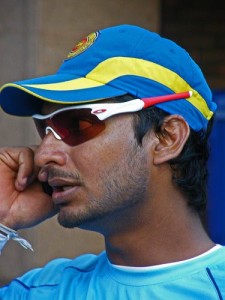 Kumar Sangakarra. Image uploaded under a Creative Commons licence, thanks to Paddynapper.

Why the backlash? The answer is simple. In describing the corruption and malpractice within the Sri Lanka Cricket (SLC) administration, Sanga’s speech also highlights the malaise that afflicts governance and civil administration in Sri Lanka today: a lack of accountability, a propensity to discount minority aspirations, and a callous disregard for the rule of law. It is reflected in the way the north of Sri Lanka is being militarised with entry to towns being checked, civilians being monitored, and the military presence growing ever more overpowering. It is reflected in the way politicians show no restraint in flexing muscle at any given opportunity, whether in giving approval to a major civil project or in obstructing a civil protest on any issue. It is reflected in the way industrial action by factory workers in the Katunayake free trade zone to protest against a pension scheme was followed by police action that resulted in the death of a protestor.

The Island editorial on 7th July draws a parallel between the prosecution of “Sanga’s crime” (which was to highlight the maladministration of SLC whilst being a “contract player”) and murder: “This is a country where even contract killers get away with their crimes thanks to their political connections….So, while notorious criminals are going places, why should the incumbent government try to persecute a brilliant cricketer of international repute who passionately feels for his country and has done her proud, for calling a spade a spade, on the flimsy grounds that he is a ‘contract player’?”

The hypocrisy is astounding. The contrast is damning. Perhaps this is why a statement has been released yesterday (12th July) by the Defence Secretary Gotabhaya Rajapaksa , “commending” Sanga for his speech stating that, “he can’t recall any sporting personality throwing his or her weight behind the military before such an audience under similar circumstances”. It appears to be yet another public relations ruse to cause confusion – for once, something that is very transparent!

There is no need to labour the point any further – especially considering that following the Minster of Sports’ statement, the Prime Minister of Sri Lanka told parliament of the involvement of certain Sri Lankan politicians in drug trafficking. Of course, there have been no questions asked. No investigations by the police. No accountability. No transparency. No integrity. No discipline. No commitment to the people of Sri Lanka.

Funnily, these are the same concerns that Sanga raised in his address at Lords with respect to SLC; the stark reality is that these concerns go far wider than the SLC administration. The corruption and nepotism of SLC as described in Sanga’s address is symptomatic of the corruption and nepotism of the Government of Sri Lanka (GoSL). In fact, if one were to remove the word “cricket” from one of the key statements contained within Sanga’s address, the truth comes across loud and clear:

“Accountability and transparency in administration and credibility of conduct were lost in a mad power struggle that would leave Sri Lankan [….] with no consistent and clear administration.”

The last minute tampering with the order of the Sri Lankan cricket team before the 2011 World Cup final and the inclusion of Sanath Jayasuriya, a government parliamentarian, in the recent English tour are just examples of the malaise touching one aspect of Sri Lankan civil society. There are no questions asked; just the imperative that orders are to be complied with. However, Corruption, bribery and partisan politics are widespread across all aspects of Sri Lankan society, not just cricket and it has lead to a strong culture of impunity replacing democracy and with it the freedom of expression and preservation of civil liberties and human rights.

Mike Atherton, former England Cricket Captain captures this sentiment in his article in The Times on 28th June, 2011: “It is a selfish and an overtly political act. Jayasuriya is no longer a cricketer but a politician; since February 2010 he has been an elected MP in his home constituency of Matara for the United People’s Freedom Alliance, the ruling party in Sri Lanka that has the final say on the selection of the national team and is accused of running the country in an increasingly anti-democratic manner and ending the civil war in a barbaric way.”

Strong arm methods are effective and often applied. Everything seems to work that way in Sri Lanka in and out of the cricketing sphere.

Sangakkara is but one voice – but what a difference he has made with that one voice. His address has demonstrated that regardless of professional or cultural background, individuals can make a huge difference. How many more will join him and the few others that have spoken out before him? Not with any agenda or motive but simply the desire to restore democracy, transparency, accountability and liberty to all aspects of Sri Lanka’s civil society. For those who do not want to stand alone, organisations working for the greater good – such as the Centre for Policy Alternatives and Transparency International in Sri Lanka – need your support. Sanga’s speech was a plea for good governance within the SLC administration; your actions can make it a call for good governance throughout all aspects of Sri Lankan society.