The rise of military-run tourism in Sri Lanka

Deep in the jungle of the northern Mullaitivu district, south of the town of Puthukkudiyiruppu, lies the former LTTE operations hub, now a ghost town. Visitors are offered a guided tour of the hub which comprises of a 3 story underground bunker, a firing range, a film hall, a semi-underground garage and a funeral parlour.

What is absent are details of the suffering faced by the Tamils who lived in constant fear of the LTTE, and then persecution by the Sri Lankan army, and of the aftermath of 30 years of civil war that has destroyed the social and economic infrastructure of the region. Visitors, who are predominantly Sinhalese, seem content to marvel at war relics rather than truly comprehend the devastating events that took place here.

Offensive triumphalist memorials celebrating the government’s ‘triumph over terrorism’ now litter the northern provinces, such as this one in Pudumathalan marking the spot where LTTE leader Prabhakaran’s body was found. The explicitly Sinhalese and martial imagery is the exact opposite of the conciliatory, inclusive approach which is needed if true reconcilliation is to take place.

Good insight into the manner in which government triumphalism is being swallowed by many in Sri Lanka is provided by this report on a trip to Delft Island and Mullaitivu in February 2012 from ladkasun.org – a Sri Lankan tourism website.

There is much photographic evidence of this ‘Sinhalisation’: a phenomenon which we have discussed previously.

Beaches around the island have been commandeered by the government, which is forcing people off their land and denying them access to the beaches. The Sri Lankan Tourism Development Authority has introduced 45 tourism zones, mainly in the Northern and Eastern parts of the island. There are serious concerns around how these zones will effect local residents, and the evidence thus far is not good.

Meanwhile since the end of the war, the military has taken an active role in the economy of the North and East by positioning various checkpoints to control transportation, annexing civilian land and establishing High Security Zone restrictions. Heavy restrictions have been placed on the work of fishermen.

The Navy runs a lucrative boat service for tourists to Mannar: 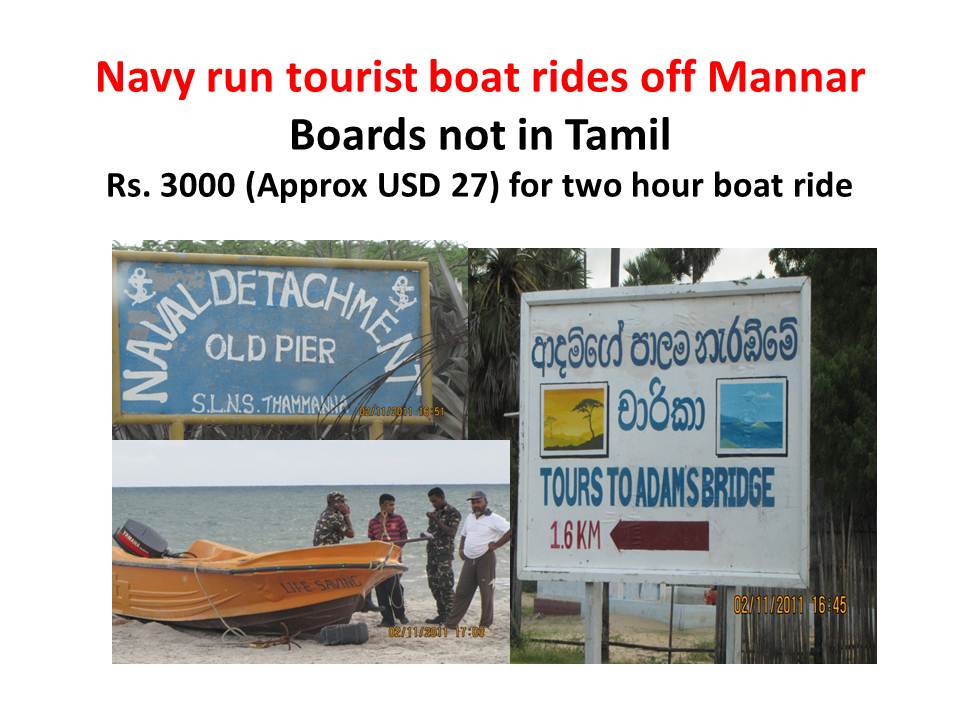 And a hotel in Jaffna: 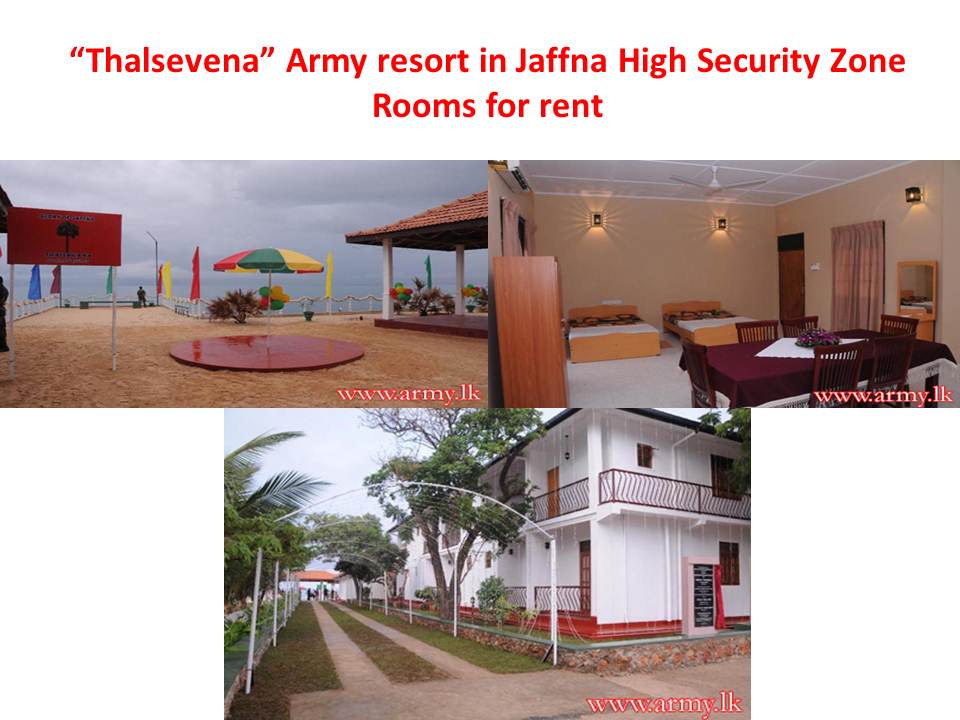 But this is just the tip of the iceberg. Our Ethical tourism campaign has uncovered at least 18 examples of tourist attractions, hotels, or even entire resorts that are run by the Sri Lankan military.
It is perhaps not surprising that the military want to cash in on Sri Lanka’s tourism boom. As the graph below shows, business is booming as new travelers flock to Sri Lanka following the end of the war. But with the armed forces taking on a larger and larger role in Sri Lankan life, it is vitally important that tourists make good choices, and do not contribute to the problem. 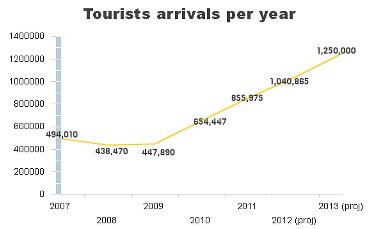 The Government of Sri Lanka is certainly working hard to make the most of the boom. This interactive map gives the Tourism Development Authority’s official account of Sri Lanka’s tourist attractions and current development projects.

And all this new tourism means more money coming in to the coffers of the Sri Lankan Government – a significant portion of which then goes to its defense budget as Sri Lanka continues to expand its already vast military. Despite accusations by the international community of war crimes being committed on both sides of the civil war, Western and Indian tourists remain undeterred from making Sri Lanka their holiday destination. Perhaps some have thought through the implications and think it is still important to come, to benefit the local economy, to see the situation for themselves and help combat the Government of Sri Lanka’s attempts to isolate its own people, particularly its Tamil people. But too many people make the decision to come to Sri Lanka without thinking through the potential consequences, and without doing the research necessary to ensure that the benefit to the military is minimised

We have added fresh information to our campaign aimed at promoting ethical tourism in Sri Lanka. Check it out, and please send it to anyone you know who is thinking of going.