The Government of Sri Lanka announced some weeks ago that it would raise defence spending by over 5% in 2012, allocating 230 billion rupees ($2.1 billion) for 2012, up from 215 billion rupees ($1.92 billion) estimated for 2011. This is almost double the combined expenditure on health and education which constitute only 3.3 % and 2.5% of total spending. Whilst most governments today are shouldering enormous budget deficits in an effort to keep economies from falling into recession, it seems that the Government of Sri Lanka is resorting to the same option – a deficit of over a trillion rupees – in order to keep the army from shrinking. Almost half of the defence budget of 230 billion rupees will be spent on the 200,000-strong Army.

The Government has defended its allocation on the grounds that it has to meet significant instalment payments on military hardware bought to fight the war. However the reality is that it is more about the fact that the Rajapaksas know that their popularity is dependent upon keeping unemployment down – by making the army artificially large – and by militarising the nation. However it may prove a false economy: Sri Lanka’s heavily leveraged economy is dependent upon the IMF releasing the next tranche of its US$2.6 billion loan. The IMF made clear at the time of the loan and in a public letter a few months later that the loan program was based on the agreement by the Sri Lankan Government of a considerable reduction in military expenditure. Were the IMF to remember their commitment and renegotiate the remainder of the loan then the Rajapaskas love of the gun could prove disastrously expensive. 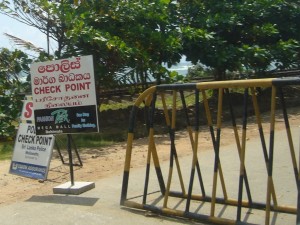 Meanwhile strict austerity measures are causing unbearable increases in the cost of living for the Sri Lankan public. We sought out the views of some of them:

“It’s a mixed bag” said one fellow Sri Lankan; let’s call him Mr X. “Colombo is being scrubbed clean and developed; it is beautiful. The army makes it possible; its free labour isn’t it? So what is the problem?”
Mr X was referring to the fact that the Urban Development Authority has been placed under the control of the Defence Ministry. As early as last year, the Military was mobilised to evict 75,000 families from their shanty dwellings in the city topave the way for development projects. Mr Y, another educated Colombo resident, confirmed that “a lot of development work is going on but the public have no say”. Only a few days ago it was made known that, due to the indebtedness of the Sri Lankan Cricket Board, the Defence Ministry will take over the maintenance of Sri Lanka’s most prestigious cricket stadiums; the army, navy and air force taking one each into their ‘care’. Cricket fans would, I suppose, take on the sentiments of Mr X and perhaps state that – ‘it’s free labour and a big help to the Cricket Board’. However, Sri Lanka’s main opposition party fears that this latest development is part of a wider trend involving the militarisation of public institutions; with one party member “noting that the army was also selling vegetables and building city infrastructure, he commented that the military was ‘taking over everything’ according to the whims of the country’s defence secretary”.

However, Mr X was insistent that although the army maybe larger than ever, without a war to fight, their presence is not really felt by civilians. Could this explain the ‘acceptance’ by Sri Lankan society of the government’s dependence on the military to maintain its rule? He said“You don’t see check points and uniforms around you. But yes it is a dictatorship and until they hold a gun to your head I guess you don’t know.” This echoes the words of John Hay – “The evils of tyranny are rarely seen but by him who resists it”. 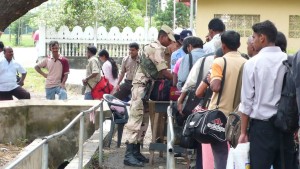 Yet for those looking closer, militarisation is evident in many guises and clearly explains the need for more defence spending in post war Sri Lanka. An article in The Economist earlier this year highlighted the numerous new pursuits that the forces in Sri Lanka have taken to: “Soldiers are taking on the civilian middlemen who control the vegetable trade by selling cheap produce, some of it from military farms. The navy has even opened a vegetable shop near one of its biggest camps in Colombo. The army has an air-ticketing agency. It is building roads and bridges, and houses for the internally displaced…The army will even supervise the private companies that collect the rubbish in Colombo…The navy has a canal-boat service in Colombo; it also offers whale-watching tours… retired officers are now posted overseas as ambassadors.”

The Military’s involvement in public ventures is disturbing to say the least; one such example is the Military’s controversial involvement in university life. Conducted by military personnel in camps all over the country, university students have been enrolled into a compulsory ‘Leadership and Positive Attitude Development’ despite petitions and protests against it. The programme focuses on regimentation and unquestioning obedience utilising a module of “national heritage” which exclusively centres on cultural symbols of the Sinhala community. Mr Y also confirmed to me that “there was a compulsory national service scheme introduced to the university curriculum and one girl died after participating. Now they are introducing a community service scheme into the universities which is also organised by the army. A security service also has been introduced into the universities; which is provided by a company wholly owned by the ministry and at 200-300% above the cost of a private security company. All these measures were introduced without any consultation with Inter-University Students Federation or the academic staff.”

Mr Y goes on to explain possible reasons for the size of the Military by stating that “they are being deployed in the north and east, mainly Tamil and Muslim areas in camps, permanent bases and quarters as settlements to alter the demographic pattern. There is a Sinhala Buddhist invasion of these areas led by the army cantonments; temples and statues coming up in all town centres.” The Economist article referenced this deployment: “Restaurants along the highway to Jaffna in the north are mostly army-owned or –run…On the Jaffna Peninsula the army converted a former officers’ mess into a 22-room luxury resort. It runs two hotels elsewhere… In the Vanni district, for example, an area populated mainly by the Tamil minority, where hundreds remain displaced or resettled in shoddy shelters, many administrative measures need a military stamp of approval. The governors of the Northern and Eastern provinces are both retired military commanders.”

Whilst a 200,000 strong army is awarded daily pursuits normally reserved for civilians, unemployment figures are soaring. The whole of Sri Lanka, particularly the North and the East, are forced to endure the Government’s austerity measures whilst facing mass unemployment – a double whammy! These issues are generally unknown to the average Sri Lankan as economic statistics are manipulated to maintain a picture of economic development and prosperity. Don’t get me wrong; the army is worthy of every honour and reward fit for those who endanger their lives to protect civilians. Leaving aside the allegations levelled against the Sri Lankan forces for their part in the human destruction at the end of the war, such reward and recognition is normally given in the form of medals of valour, provision for families and rehabilitation to re-enter into civilian society and ways of life. However the Sri Lankan defence secretary seems to have a different view on this subject. Mr Y believes that “the forces are going to be given pride of place in the public services. Conditions of employment, standards of accommodation and remuneration levels will be increased, especially for officer grades in order to establish a degree of loyalty.”

So now we know why the army must be at full strength; it is preparing to take over every aspect of civilian life and secure the rule of the Rajapaksa regime for the foreseeable future. The only opposition to the increasing militarisation of Sri Lanka can be found in the voices of ordinary citizens such as Mr X and Mr Y – both Sinhalese. It is not brutal force that is our weapon; it is the truth our minds discern and the convictions of our hearts.

Written by a Sri Lankan who has asked to remain anonymous