Thirty years on: no solution for Muslims expelled from their northern homes

This October marks thirty years since the entire population of Muslims living in the Northern Province of Sri Lanka were expelled by the Liberation Tigers of Tamil Eelam (LTTE). Yet thirty years on, there has been no organised government initiative or adequate support to help them return to their homes and places of origin in the North. Many displaced Muslim families still live in what were intended to be temporary relocation sites. Regarded as temporary residents in their new homes but unable to return to their places or origin, the communities are trapped between places, “neither here nor there” according to one local activist in Puttalam.

The plight of the northern Muslims is frequently forgotten or left out of discussions about the impact of the protracted civil war, and there is no official recognition of their mass expulsion and suffering. The Rural Development Foundation, based in Puttalam, has recently carried out research with displaced Muslims to raise awareness of the issues they face in trying to return to the North and put forward solutions. In this post we explore some of their key findings. 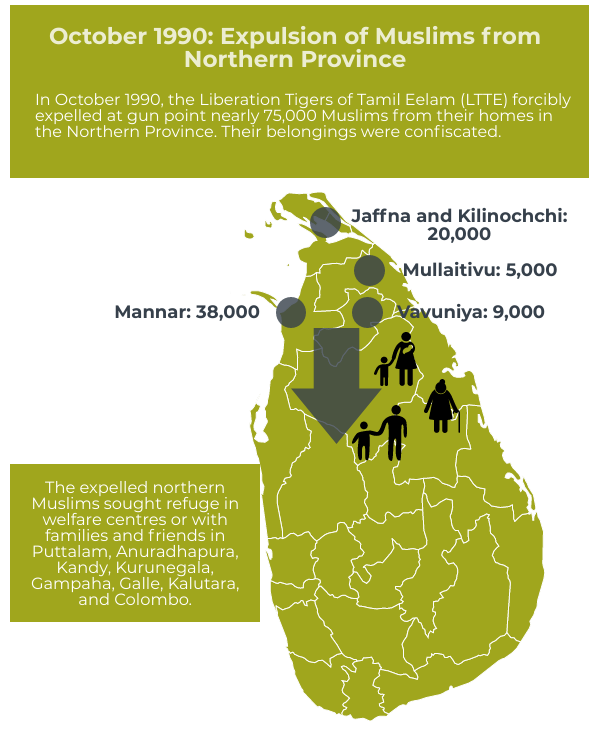 What happened to the northern Muslims in 1990?

Between 15th and 30th October 1990, the LTTE forcibly expelled at gun point nearly 75,000 Muslims from their homes in the Northern Province. Many were given only hours to leave. Most left on foot, taking only limited possessions with them, while most of their belongings were confiscated by the LTTE. Many were further stripped of possessions at checkpoints on their journey.

The expelled Muslims travelled south and sought refuge in welfare centres or with family and friends in Puttalam, Anuradhapura, Kandy, Kurunegala, Gampaha, Galle, Kalutara, and Colombo. A large proportion settled in Puttalam in temporary camps set up for the displaced.

What problems have displaced Muslims faced in their attempts to resettle? 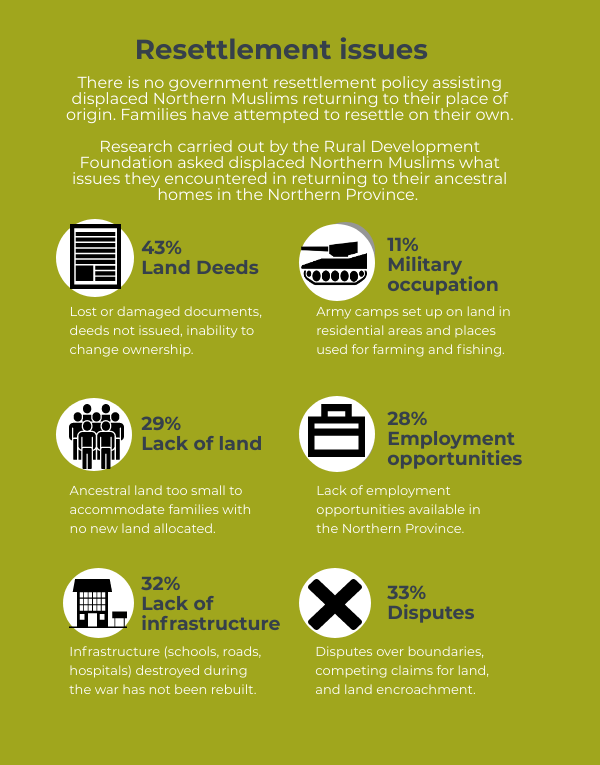 There has been no comprehensive attempt by the government to resettle the displaced northern Muslims, but since 2009 they have started returning in substantial numbers. Given the circumstances in which they left, many of the returning Muslims have difficulty proving their ownership of land, with legal documents lost, damaged, and destroyed over the years. Some of those who lived in houses built by housing schemes in the Northern Province both before 1990 and after 2009 have never been issued official land documents. Some have also encountered difficulty in changing land ownership, with requests for name changes not acted upon.

On their return displaced Muslims faced disputes over boundaries, land encroachment, and competing claims for land. Their land has been encroached and misappropriated by politicians, state departments and the military as well as some Tamil people living in the area. More than ten percent of people interviewed for the Rural Development Foundation study said that the military had occupied their land. Army camps have been set up in residential areas and on lands that were essential to livelihoods, used for trading, farming, and fishing.

“The army has taken over my agricultural land, cultivating it, harvesting, loading up paddy bags and sending them off in vehicles. Whereas I, who cultivated in these lands before, am forced to live without being able to fend for myself by handpicking left over paddy bunches.” Woman from Musali, Mannar

Much of the infrastructure in areas formerly occupied by Muslims in the north was destroyed during the war. Before displaced people can resettle there is a need for rebuilding of schools, roads, hospital facilities, places of worship, burial grounds, and playgrounds. Obtaining land to build common infrastructure has proved difficult for returnees and has slowed down resettlement. Families with school-age children and elders requiring regular medical attention may not be able to return due to lack of infrastructure.

A major issue faced by many families is the lack of land available. Over the thirty years in which they have been in protracted displacement, families have grown and according to data collection in 2017, more than 100,000 individuals have registered to be resettled.

Eleven years after the war ended, the Northern Province remains one of the most deprived areas of Sri Lanka. Muslims hoping to return to their places of origin reported a lack of employment opportunities. On top of the misappropriation of land previously used for sustaining livelihoods through trade, agriculture, and fishing, this makes returning economically unviable for some families.

How can these problems be addressed? What should be done to help displaced northern Muslims?

The situation of displaced northern Muslims must be properly considered as part of any transitional justice programme, including reparations and resettlement policies. Government officials and politicians must recognise that evicted Muslims have the right to reclaim their properties in their places of origin.

The Rural Development Foundation’s research asked displaced Muslims what they expected government and decision makers to do to help. Key recommendations include involving local communities in resolving disputes, releasing lands that have been misappropriated, and establishing a coherent national policy on resettlement for northern Muslims.

Meanwhile, it is imperative that the international community demonstrates that they have not forgotten what happened to the northern Muslims. International actors too often view Sri Lanka’s conflict through a simplistic lens of the Sinhala-Tamil divide, overlooking some marginalised communities like the northern Muslims. They must listen to local communities and support their efforts to rebuild their lives and foster cooperation between Tamil and Muslim communities from the North. 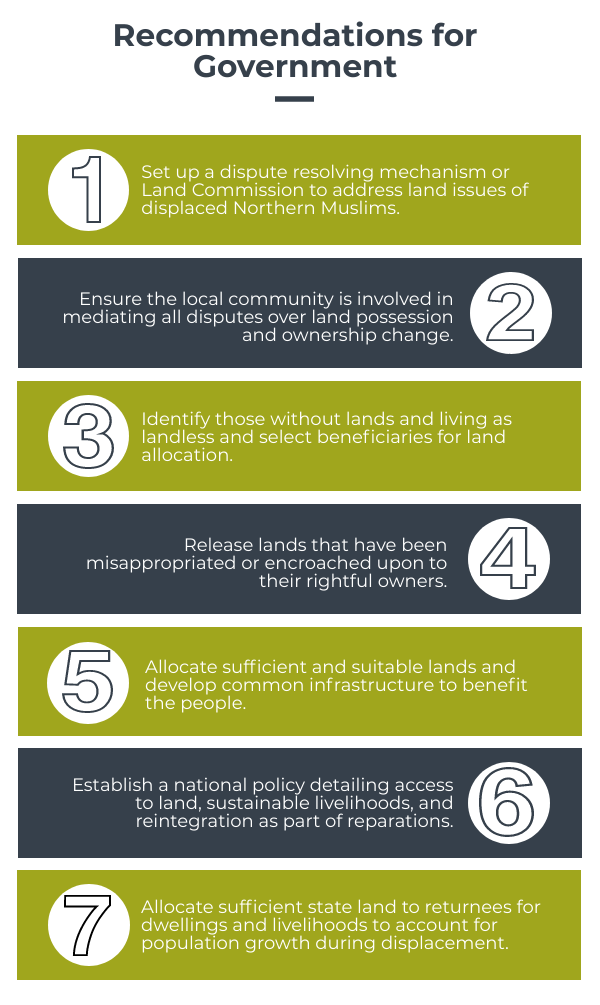 More information about the situation of northern Muslims:

Black October – 30 years since where are we? Article by activist Shreen Saroor