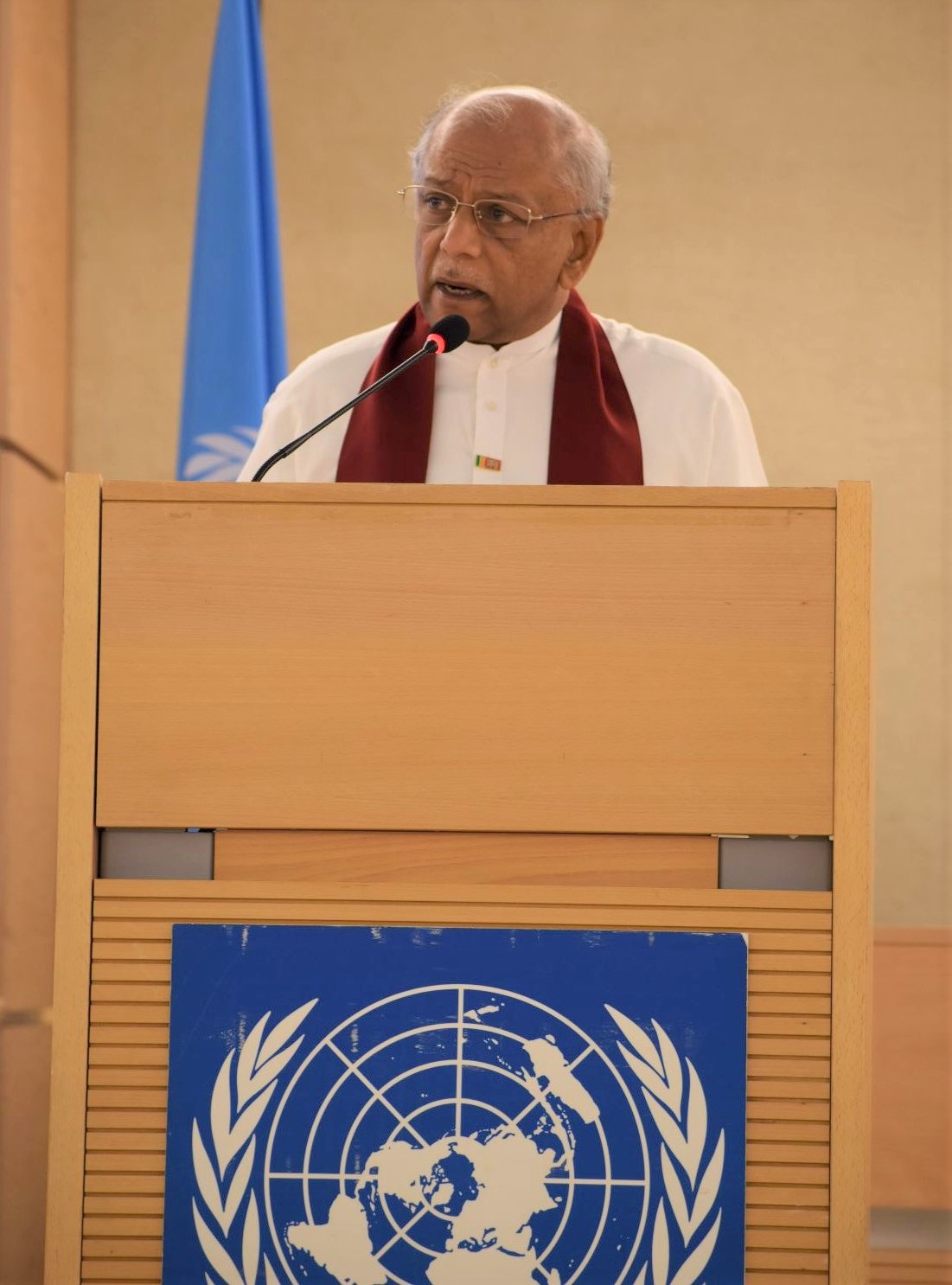 Yesterday, Sri Lanka’s Minister of Foreign Relations Dinesh Gunawardena, took to the stage at the opening of the 43rd Human Rights Council (HRC) session to announce that his government was formally “withdrawing” support for Resolution 40/1 – a process initiated by the previous government and members of the international community to deal with the legacy of the civil war and hold perpetrators of atrocity crimes to account.

In light of recent indications from the Prime Minister and his cabinet, it is a move which comes as little surprise. The Rajapaksa’s have for a long time criticised the HRC process as a “humiliation” and an “injustice,” and yesterday’s policy announcement in many ways represents the formalisation of that stance.[1]

Gunawardena’s statement therefore appears to have been a first pitch at persuading HRC members to bring a close to the process in a year’s time. However, it was a pitch based not only on distortions but outright lies. We highlight three below and explain why member states must not buy into them.

Gunawardena’s speech began by spinning a grossly misleading account of Sri Lanka’s attempts to deal with the legacy of the war – one in which strides made on accountability and reconciliation by the previous government of Mahinda Rajapaksa had been thwarted by the actions of UN member states in Geneva in October 2015.

In the words of the Foreign Minister, “[under the previous Rajapaksa government] several domestic mechanisms/commissions were established to address post-conflict issues of concern, including those related to accountability, rule of law and human rights … The government that came to power in Sri Lanka in January 2015 jettisoned this home-grown reconciliation process, which was bearing fruit.” The Foreign Minister then deployed this version of events to propose a new domestic accountability process – a “Commission of Inquiry (COI) headed by a Justice of the Supreme Court” – while rubbishing the “unconstitutional and undeliverable” commitments contained within HRC Resolution 40/1.

Both of the mechanisms to which the Foreign Minister approvingly referred in his speech – the Lessons Learned and Reconciliation Commission (LLRC) and the Paranagama Commission – were indisputably whitewashing exercises. In the words of Human Rights Watch, for example, the LLRC “exonerated government forces for laws-of-war violations, rehashed long-standing recommendations, and took no concrete steps to advance accountability.” The International Commission of Jurists even went to the lengths of describing the LLRC as an attempt “diffuse the demands for justice,” adding that it was “explicitly not an accountability mechanism, and was widely and rightly criticized as being faulty in its mandate, its membership, and its conduct” [emphasis added].

The Paranagama Commission, created in August 2013 to investigate disappearances and war crimes allegations, suffered from many of the same problems – albeit adopting the slightly more sophisticated approach of admitting that some individual human rights abuses may have taken place while refuting the possibility of “system crimes.” A nationwide civil society-led consultation later highlighted the total lack of trust in the Commission among victims, one of whom referred to it simply as “a lie.”

Victims of serious human rights abuses in Sri Lanka have been repeatedly let down by so-called ‘home-grown solutions.’ In the current context, another Commission of Inquiry would almost certainly result in them being let down again, deepening the culture of impunity in Sri Lanka and pushing the country further away from the sustainable peace that is needed. It is because such solutions have persistently failed – not just under the Rajapaksas, but over decades in Sri Lanka – that the Human Rights Council recommended international involvement to safeguard the credibility of any accountability process. It is also why member states must continue to insist on that proposal today.

…and no objective observer, let alone the Tamil people, could look at the actual record and facts of the Sri Lankan domestic justice and accountability mechanisms and reasonably conclude they can be relied upon to credibly offer the justice the Tamil people seek.

2) ‘The OHCHR investigation on Sri Lanka can’t be trusted’

In a further attempt to buttress his argument the Foreign Minister asserted that the UN OHCHR report on war-related violations in Sri Lanka (the ‘OISL’) – which in September 2015 galvanised action at the HRC – was “much flawed,” describing it as an attempt to “unjustly vilify” Sri Lanka’s armed forces.

In fact, the OISL – composed of three international experts of unimpeachable integrity and acting with the support of UN Special Rapporteurs – found “reasonable grounds to believe” that both sides in the conflict were responsible for war crimes and crimes against humanity. These allegations were founded on thousands of written submissions, hundreds of interviews with victims and survivors, and the most extensive analysis of data on the civil war ever conducted. They are also corroborated by other international investigations into war-time human rights violations: the UN Panel of Experts Report, the ‘Petrie’ Report, and that of the International Group of Eminent Persons.

As an alternative, Gunawardena pointed in his speech to the findings of Sri Lanka’s aforementioned domestic processes; processes riven with flawed mandates, procedural deficiencies, and deep conflicts of interest. He also marshalled files obtained by a British parliamentarian Lord Naseby, the so-called ‘Gash despatches,’ to suggest that civilian casualties during the war have been “vastly exaggerated.” Work done by human rights groups, including the Sri Lanka Campaign, has conclusively exposed the grossly misleading and selective manner in which this evidence has been deployed.

For many, the Foreign Minister’s remarks will evoke memories of some of the most brazen denialism by members of the Rajapaksa regime; a regime which once suggested that it had conducted a war involving “zero civilian casualties.” Member states ought to be as sceptical today as they were then.

3) ‘The HRC process has undermined the safety of Sri Lankans’

Among the most shocking claims from yesterday’s address to the HRC was Gunawardena’s claim that the HRC process had undermined the safety of Sri Lankan citizens – suggesting that it may have contributed to the April 2019 Easter Sunday terror attacks in which 259 Sri Lankas were killed. He remarked:

“Most seriously, it is seen that the dictated changes in the country pursuant to [Resolution] 30/1, undermined [the] national interest [and] compromised national security, including the weakening of national intelligence operations and related safeguards, which are deemed to have contributed to the lapses that resulted in the Easter Sunday attacks in April 2019.”

As underscored in the Twitter thread below, such claims fail to withstand the most basic scrutiny. They will also no doubt be profoundly insulting to victims and survivors of those attacks – many of whom have pointed instead to the gross negligence of government officials as a key factor behind the attacks.[2]

This is a cheap shot.

What an insult to the folks who actually lost loved ones in the Easter Sunday Attacks due to the gross negligence of the #LKA government.

The GoSL is implying that it was due to a resolution in the UN.

For decades, Sri Lankans, especially those from minority communities, have endured appalling violence at the hands of both state and non-state forces. That a process expressly intended to prevent recurrence of such terror be cast as responsible for it, is absurd in the extreme.

As members of the international community look to respond to the government of Sri Lanka’s case for charting a new course, it is vital that they tackle head-on the deceit and lies which prop it up. That means calling out the record of past domestic accountability processes, standing up for the findings of investigations into war-time violations, and crucially, making a positive case for the kind of credible accountability mechanism which has long been recognised as necessary for safeguarding the safety and dignity of all Sri Lankans. In short, they must respond with the truth.

[1] Notably, however, the government appears to have stopped short of attempting to bring a ‘counter-resolution’ at the HRC; meaning the government will continue to face monitoring by the UN’s human rights chief and will remain bound by the terms of Resolution 40/1 until its expiry in March 2021.

[2] It is also telling, but perhaps unsurprising, that Gunawardena omits to mention a recent government report which highlighted the fact that members of Gotabaya’s own party had attended National Security Council meetings in the run up to the attacks (p. 72). And further, that in the preceding years while in government, Gotabaya was one of the many officials who had been personally warned of the threat posed by extremist groups operating in Sri Lanka and apparently failed to act (p. 6).