Time to use human rights sanctions in Sri Lanka 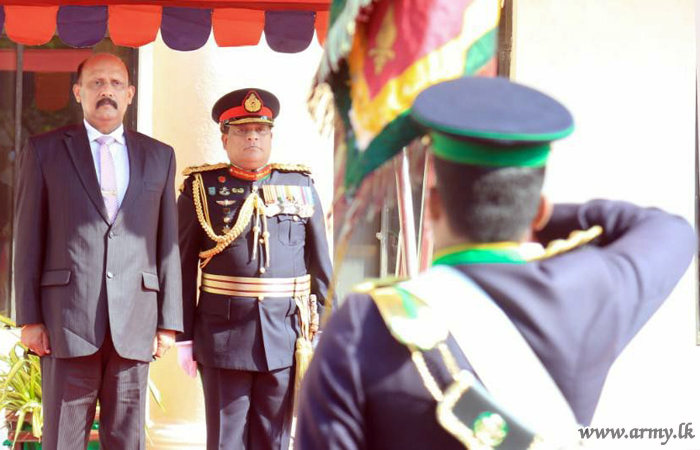 Today, on International Human Rights Day, the UK’s Foreign, Commonwealth & Development Office (FCDO), announced that Furqan Bangalzai, a former commander of a Pakistani terrorist organisation, would be designated for sanctions under the Global Human Rights Regime. In coordination with the US and Canada, the UK has also introduced sanctions against the military of Myanmar.

However, once again, these new lists of individuals designated for sanctions include no Sri Lankan individuals or organisations. This is despite the fact that many high-profile figures in the Sri Lankan military and government meet the necessary criteria for sanctions. This is especially true of Defence Secretary Kamal Gunaratne and Army Commander Shavendra Silva, who continue to hold positions of significant power and influence despite credible allegations of command responsibility for mass atrocity crimes. Because of their impunity in Sri Lanka, it is imperative that the international community takes action against them.

Today, we are renewing our call for countries with human rights sanctions regimes, including the UK, US, Canada, Australia, and the European Union, to sanction key individuals in Sri Lanka. As part of our campaign, we are publishing factsheets and graphics which set out the case for sanctions against Shavendra Silva and Kamal Gunaratne.

What are the criteria for sanctions?

The UK’s Global Human Rights (GHR) sanctions, which came into place in July 2020, target individuals or organisations who are involved in serious violations of human rights around the world. The GHR sanctions are supposed to provide accountability for and deter serious violations of human rights, particularly cases of sexual violence, enforced disappearances, extrajudicial killings, human trafficking, violence against human rights defenders and journalists, and violence against individuals due to their religion.

Someone can be designated for sanctions if there are ‘reasonable grounds to suspect’ that person was involved in human rights abuses, promoted them, provided support for them, concealed evidence for them, or profited from them. The FCDO has claimed that the sanctions will prioritise sanctions where ‘the relevant jurisdiction’s law enforcement authorities have been unable or unwilling to hold those responsible for human rights violations or abuses to account.’

Read more about the criteria for sanctions under the UK scheme in our previous blog post.

Which individuals in Sri Lanka could be in the frame?

Both Shavendra Silva and Kamal Gunaratne are high-profile individuals who have been credibly accused of committing gross human rights violations during the Sri Lankan Civil War, which are detailed in the factsheets below. Silva has already been designated by the US in February 2020 on the basis of the extrajudicial killings committed by the 58th Division, which Silva commanded during the final months of the Civil War in 2009. Gunaratne’s 53rd Division is accused of having perpetrated similar crimes. The International Truth and Justice Project (ITJP), which seeks accountability for human rights abuses in Sri Lanka, published extensive dossiers on both Shavendra Silva and Kamal Gunaratne in 2019, which examine the allegations against both men in detail. Instead of being prosecuted for these gross violations of human rights, however, both Silva and Gunaratne have been promoted to important governmental and military positions. Earlier this year, the UN High Commissioner for Human Rights Michelle Bachelet urged countries to place targeted sanctions on Silva and Gunaratne, as Sri Lanka is ‘in a state of denial’ about their alleged crimes. 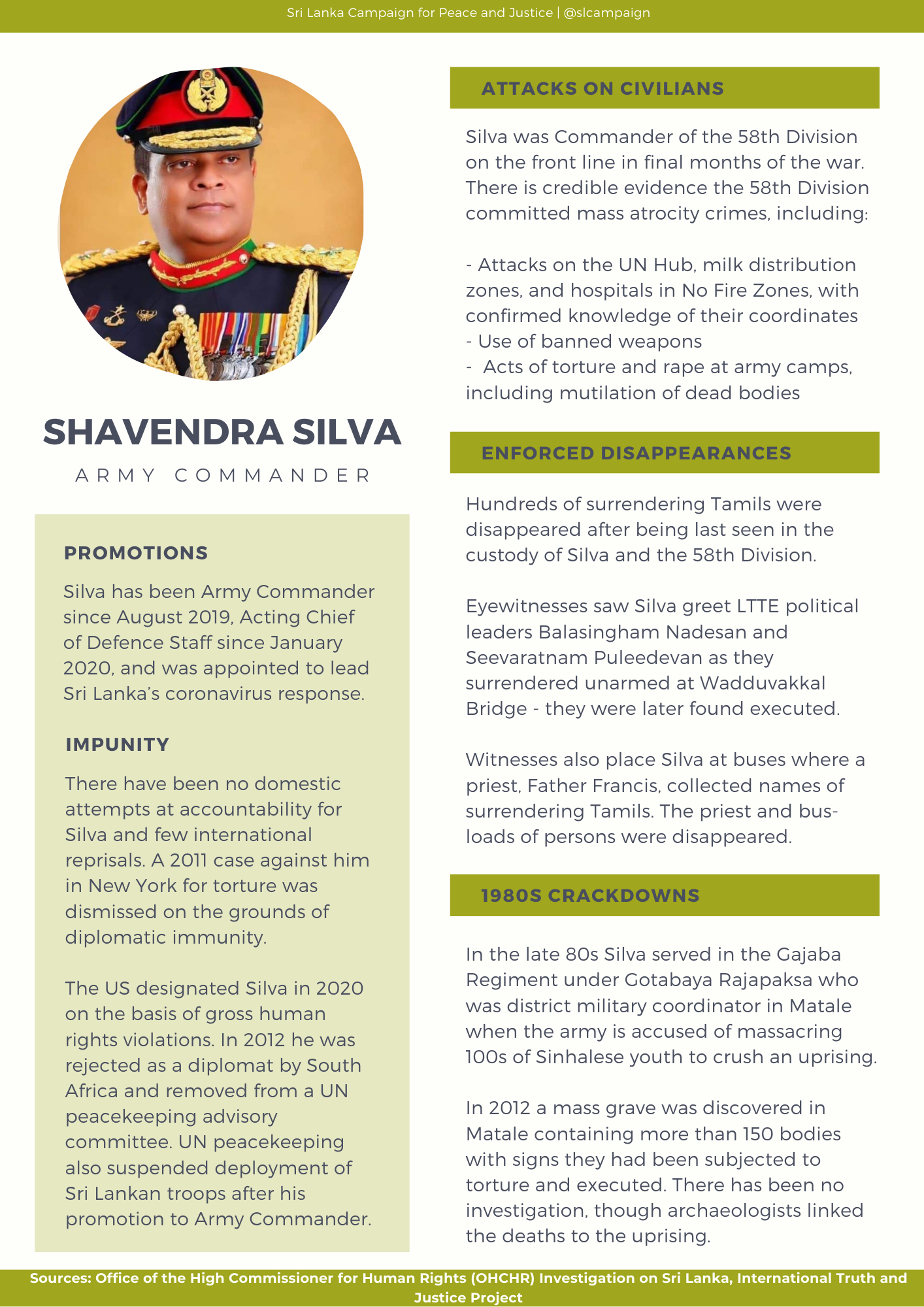 There are many other prominent Sri Lankans who meet the criteria to be designated by the UK government. Sarath Fonseka, who was the army chief during the civil war, has acknowledged that his government forces committed atrocities, although he took no action to ensure accountability for his forces after the war. Despite bearing command responsibility for these alleged atrocities, he continues to sit in the Sri Lankan parliament as a member of the opposition.

Former Tamil paramilitary leaders-turned-politicians such as Vinayagamoorthy Muralitharan, aka ‘Colonel Karuna’, and Sivanesathurai Chandrakanthan, aka ‘Pillayan’, have been accused of grave violations of human rights. Both led a paramilitary faction of the Liberation Tigers of Tamil Eelam (LTTE) which defected to the side of the Sri Lankan government towards the end of the war. This ‘Karuna group’ has been accused of committing many human rights violations before and after its defection, including extrajudicial killings and the forced conscription of children. Douglas Devananda, leader of a Tamil paramilitary group and political party which allied with the Sri Lankan government during the war, currently serves as a Sri Lankan Cabinet Minister. Devananda’s paramilitary group has been accused of extrajudicial killing, kidnapping, and extortion during and after the civil war, and Devananda himself is a proclaimed offender in India, wanted on charges relating to a murder and shootout in Chennai in 1986.

Despite the strong rhetoric against the LTTE and other Tamil separatist groups by members of Sri Lanka’s ruling party, these former paramilitary leaders are shielded from justice as Rajapaksa allies, with the Attorney-General withdrawing charges against Pillayan earlier this year relating to the 2005 murder of a Tamil legislator.

These are just a few of the individuals who the FCDO should consider for designation, and all demonstrate that even those accused of the most egregious human rights violations can rise to the very top in Sri Lanka without investigation or prosecution, including the President himself.

Shavendra Silva, Kamal Gunaratne, and other high-profile Sri Lankans continue to enjoy positions of power in Sri Lanka despite the allegations against them. In a recent interview, Gunaratne stated that he believed it was ‘up to the government and the foreign ministry’ to defend him against such allegations, and neither he nor Silva will face consequences under a regime which has consistently promoted alleged perpetrators and pardoned convicted war criminals. Because of this, it is necessary for the international community, including the United Kingdom, to take action.

Whilst sanctions against high-profile individuals would be only a small step on the road to accountability, it may pave the way for future action by the international community. In 1994, the UK imposed financial sanctions on those connected with the Bosnian Serb faction during the Yugoslav wars, which preceded the indictments against Bosnian Serb leaders made by the International Criminal Tribunal for the Former Yugoslavia, which began later that year. Designating alleged perpetrators in Sri Lanka would also help to draw international attention to the crisis of impunity in Sri Lanka. It would send a strong message to the Sri Lankan government and military that impunity for serious violations cannot be tolerated. 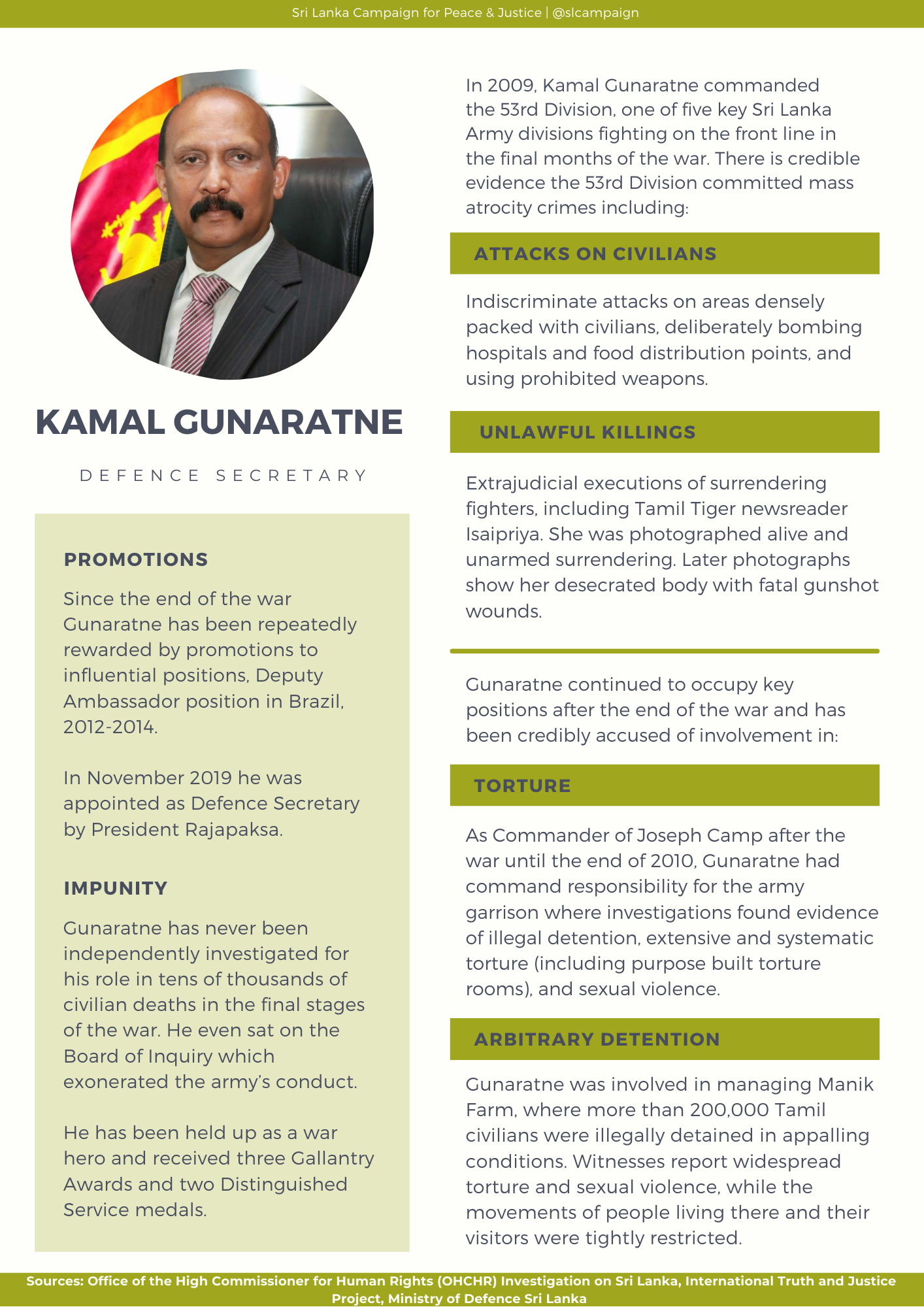 Furthermore, targeted sanctions against individuals would demonstrate that the international community takes mass atrocity crimes seriously and could serve as a deterrent against future violations for other Sri Lankan officials. As well as the impact on their international reputation, travel bans and asset freezes would harm those in the Sri Lankan government and military with foreign connections. Several Sri Lankan military personnel accused of human rights violations, including a present admiral and a former army chief, have received their military education abroad, such as in the US and the UK. Sanctions would prevent those with such connections who are accused of mass atrocity crimes from returning and prevent their families from receiving education there.

If the UK is seriously committed to accountability for mass atrocity crimes in Sri Lanka, as it claims to be, the government must demonstrate that commitment not only at the UN Human Rights Council but also by designating Silva, Gunaratne, and other high-profile Sri Lankans who have been credibly accused of human rights violations. 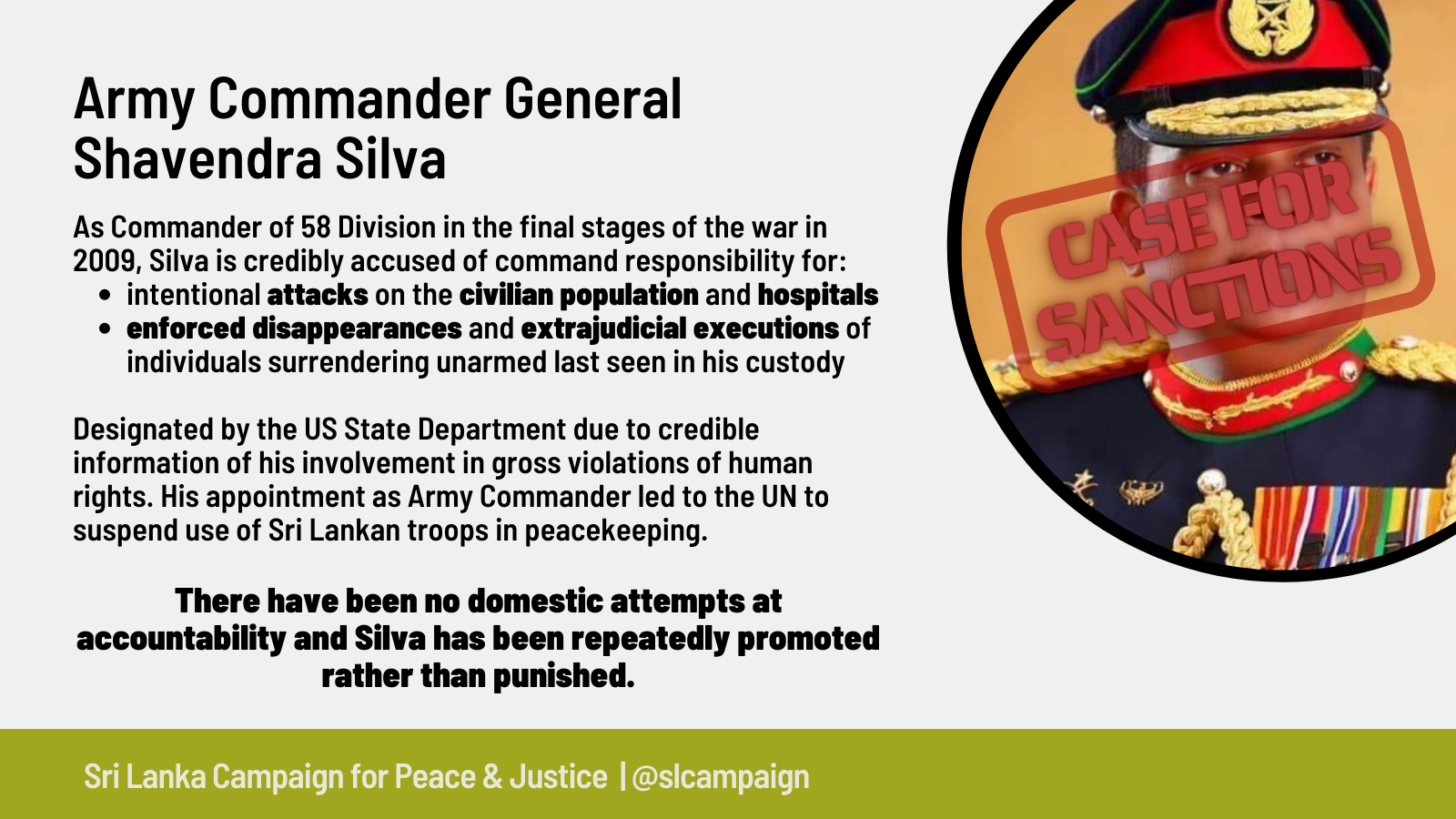 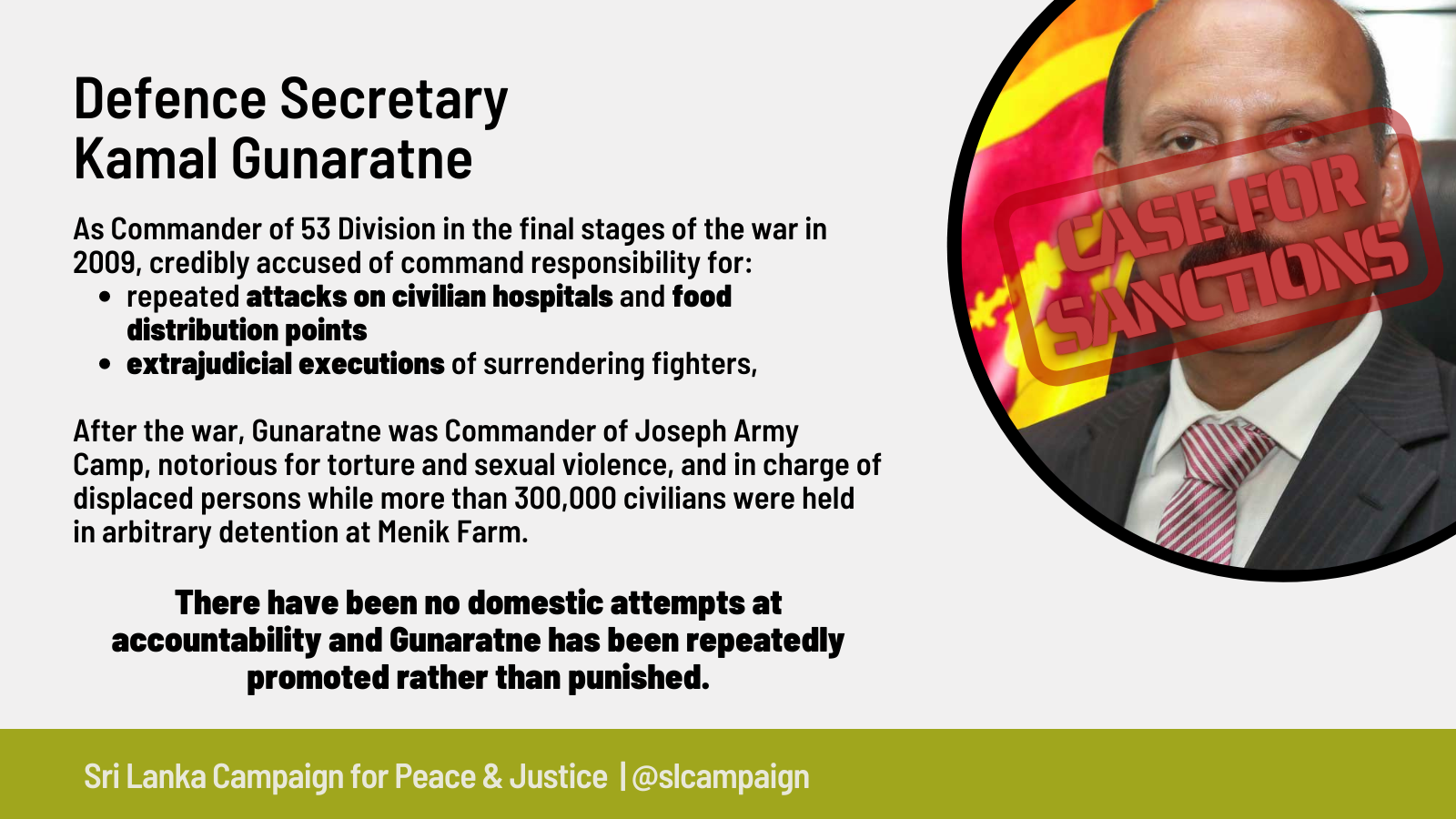