Over the weekend, reports emerged that a British Tamil man had been detained and tortured whilst on a visit to the north of Sri Lanka in early June. According to sources the individual in question Velauthapillia Renukaruban, who had travelled to Jaffna to marry, was beaten and arrested by two unidentified men near his family home on 2 June and subsequently taken away in an unmarked van.

Following inquiries by the man’s family with the British Government and human rights activists, Renukaruban was traced to a prison in Jaffna and it was confirmed that he had been taken into police custody. Shortly after, he was brought before Jaffna Magistrates Court where it was ruled that he would be held until 17 June on charges of assault. No clear details about the circumstances of the alleged assault, nor the victim, were given.

Photos of Renukaruban, taken by his lawyer during a temporary admission to Jaffna Hospital on 7 June, appear to show injuries resulting from torture whilst in custody, including cuts to the face and swellings to various parts of the body.

Thankfully – and although Renukuraban certainly remains at risk – the swift action taken by his family to locate him and secure a legal advocate, along with strong international scrutiny and reports that the UK Foreign Office is now providing consular assistance, should provide some measure of hope and re-assurance that he will now be protected.

Yet it is vital to emphasize that this incident is not an isolated one, but rather – and as confirmed by two recent reports – part of a much broader pattern of ongoing torture in Sri Lanka under the current government. 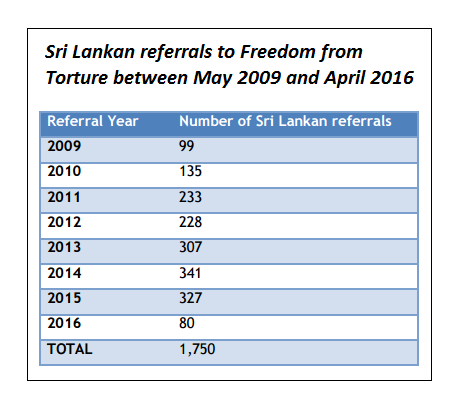 In an update in May 2016, the UK based charity Freedom from Torture said that they received 17 referrals for individuals tortured in Sri Lanka in 2015. With 327 referrals in total over the course of 2015 – a figure that includes a number of historic cases – Sri Lanka remained the organisation’s top country of origin for the fourth year running.  In another report published in June 2016, the International Truth and Justice Project stated that they hold evidence of 23 abductions by the Sri Lankan security forces resulting in torture during 2015 and 2016. Some of these cases may overlap, but most do not.

This persistent pattern is further corroborated by the findings of the UN Special Rapporteur on torture, Juan Mendez, who completed an eight day visit to Sri Lanka earlier last month and concluded that torture remains “a common practice inflicted in the course of both regular criminal and national security related investigations” and one which continues with “total impunity”.

There can be no question that torture still takes place in Sri Lanka. Yet rather than attempt to solve the problem with the root and branch reform of the judiciary and security sector that is required, the Government of Sri Lanka has instead resorted to defensiveness and denial, calling the evidence into question as opposed to committing to investigate violations. A change of attitude is sorely needed. We hope that the international community makes that clear during the current session of the Human Rights Council, at which Sri Lanka will be expected to account for these violations.