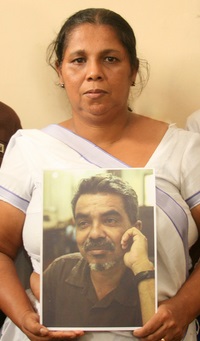 “Your kids will be killed and you will be fed their meat.”

That was but one of many disturbing threats recently received by Sandhya Eknaligoda, the wife of the disappeared cartoonist Prageeth Eknaligoda, who for the past eight years fought tirelessly for answers about the fate of her husband.

It comes amid what Sandhya has described as a coordinated campaign of hatred and intimidation following the imprisonment last month of extremist Buddhist monk, Galagodatte Gnanasara Thero. Gnanasara, the leader of the hardline Bodu Bala Sena (BBS), had himself been sentenced after being found guilty on two counts of harassing and intimidating Sandhya outside a court building in 2016.[1]

The recent threats against Sandhya have prompted international outrage, with Amnesty International and the International Federation of Journalists both issuing strongly worded statements urging the authorities to investigate the incidents and to ensure Sandhya’s safety. Such is the scale of the venom that has been spouted about Sandhya online – on both social and traditional media platforms, including the message boards of mainstream sites such as Hiru News – that supportive local journalists have launched an initiative to try to collate all the data.[2]

The government of Sri Lanka’s response to the outcry has so far been muted. The President, with whom Sandhya has personally pleaded to act, has yet to utter a single word of condemnation in relation to the threats – perhaps unsurprisingly in light of Sandhya’s suggestion that one of his personal advisers, the Buddhist monk Ulapane Sumangala, has been engaged in the campaign against her.

‘My children & I are being threatened with death. I ask @MaithripalaS & @RW_UNP to ensure our safety. Ulapane Sumangala, who advises the President, is also involved in the campaign. I ask the Sangha & the Mahanayakes not to support the insulting actions of these monks.’ #lka pic.twitter.com/7zJCGhXwLx

That campaign is unlikely to silence or deter the indefatigable Sandhya, who has so courageously and persistently fought for her rights to truth and justice in recent years. But it is hard to dismiss the possibility that such harassment – left unchecked – could contribute to a wider climate of fear that many in the current government have been eager to suggest has lifted under their watch. More worrying still is the risk that unchallenged threats of violence will lead to actual acts of violence.

And Sandhya’s case is not the only one of late. The past fortnight has seen a flurry of threats and threatening behaviour which could have a chilling effect on freedom of expression in Sri Lanka. That includes a thinly veiled death threat made against the Chair of Sri Lanka’s National Human Rights Commission by former army officer and politician Rear Admiral Weerasekara. It also includes various acts of intimidation against two local journalists involved in providing logistical support for a recent New York Times story that featured allegations of corruption by the former President Mahinda Rajapaksa. During a televised press conference held by opposition politicians loyal to the former President, photos of the journalists were displayed and their families were verbally attacked, prompting a hard-hitting letter of condemnation by the Editor of the New York Times.

“It is unacceptable for journalists to be intimidated in this way. This action appears intended to silence critics and curb press freedoms, and ultimately deprive Sri Lankans of information in the public interest.” –  Michael Slackman, Editor, New York Times (3 July 2018)

Meanwhile, intimidation against journalists, human rights defenders and victims in the North and East of the country – which we examined in a report earlier this year – has persisted as a daily reality. In June, a Tamil journalist was stopped and interrogated by seven intelligence officers while trying to cover the protests currently being led by families of the disappeared. His questioning would seem to be consistent with recent reports by the protestors that the presence of the intelligence agencies has grown more menacing in recent weeks and months.

Without clear and determined action from Sri Lanka’s political leaders – and a willingness to challenge those who peddle hatred, be it in the sphere of public discourse or (where appropriate) in the courts – the inevitable outcome can only be an intensification of the kinds of incidents described above. Before long, it may be that the limited progress on freedom of expression that Sri Lanka has made over the past three and half years, particularly in the South of the country, not only stalls but goes firmly into reverse gear. For those with a memory of a recent past in which only a few were able or brave enough to speak out, that is a very alarming prospect indeed.

[1] Gnanasara served only a few days in prison before being released on bail pending appeal.

[2] As the individual behind this initiative notes, there are some false positives in the data arising from the similarity between Sandhya’s name (සන්ධ්‍යා) and the word ‘evening’ in Sinhala.