Urgent Appeal for Action: persecution of refugees in Sri Lanka

“The people in Pakistan attacked us and say we’re not Muslims…. Then in Sri Lanka, people attack us because they say we are Muslims.”

Those were the words of 58-year old Tariq Ahmed, an Ahmadiyya man from Pakistan, who until recently had been living in the town of Negombo, Sri Lanka, having fled religious persecution in his home country. He is now one of over a thousand refugees and asylum seekers to have been hounded out of their homes by violent mobs seeking ‘revenge’ against members of the Muslim community in response to the Easter Sunday attacks in Sri Lanka.

The situation that Tariq and others like him face is now desperate. After several failed attempts to re-locate them inside Sri Lanka, hundreds of families – including children, breastfeeding mothers, and the elderly – are now scattered across three makeshift displacement camps. Conditions in the camps are dire, with serious over-crowding, inadequate water supplies, and no access to healthcare. Without strong guarantees from Sri Lanka’s political leaders, many are extremely fearful of further violence being carried out against them.

An experienced human rights activist who has been working to help the families told us: “The physical and mental trauma being done to an already scared and distraught population is beyond description.”

There is no straightforward response to the situation. What is needed right now is action at a number of levels from a range of key players. The government of Sri Lanka, members of the international community, and relevant UN agencies, all need to step up to the plate to ensure the safety of these people, deliver urgent humanitarian relief, and provide durable solutions.

So urgent is the situation that local activists are requesting countries around the world to speed up the process of re-settling individuals that they have already agreed to accept as refugees – and to consider accepting further numbers as necessary to deal with the crisis.

To make that happen we need to raise the profile of this issue and bring pressure to bear on those key players. In order to that, we are asking our supporters to do the following:

Doing either of these two things should take you just a couple of minutes. But we believe that by drawing attention to this issue, your action – together with the important work being done by those on the ground – will have important knock-on effects that could save lives. 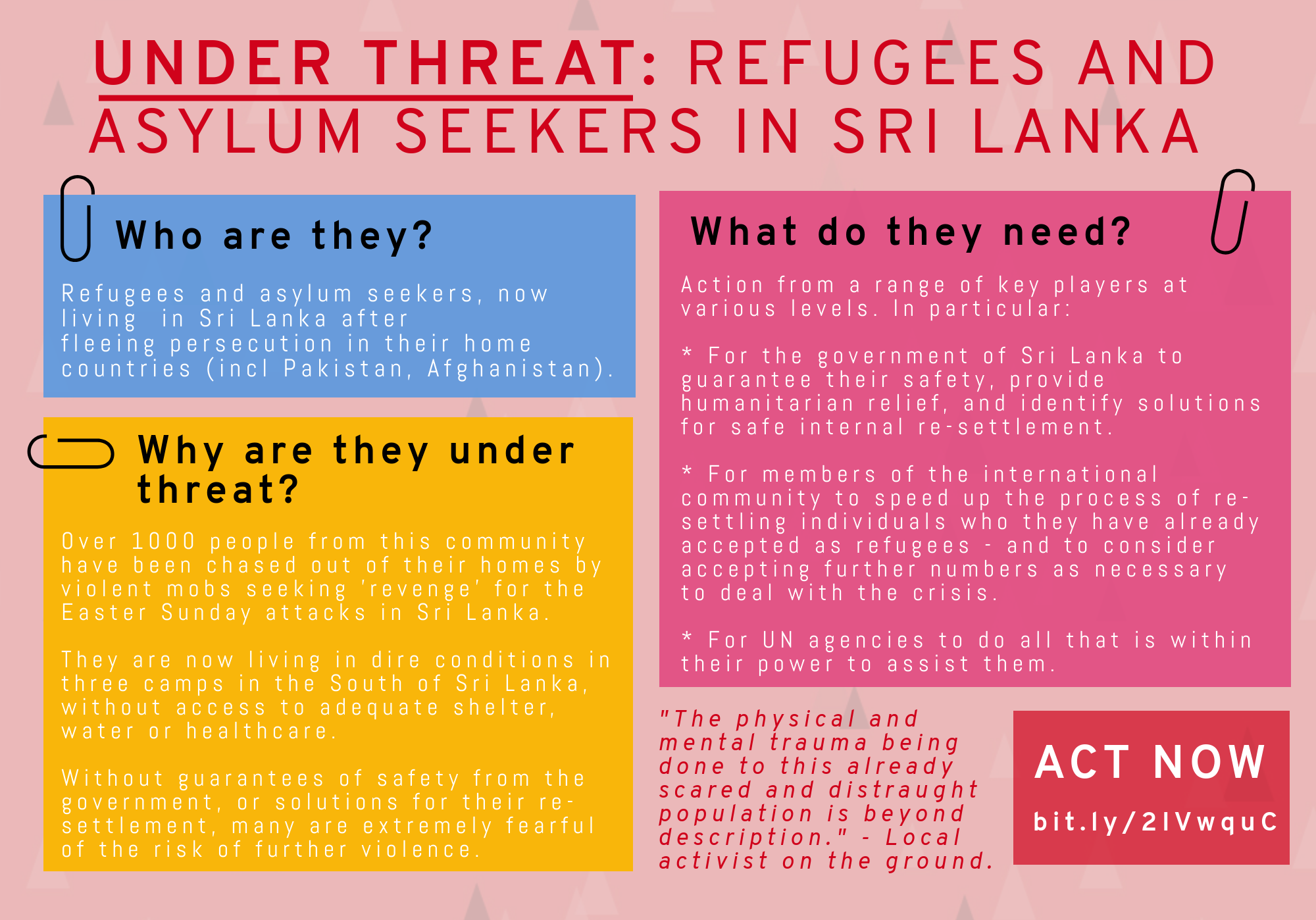 I write to draw your attention to the desperate plight of over a thousand refugees and asylum seekers currently residing in Sri Lanka, who since the devastating attacks on Easter Sunday have been threatened by violent mobs and hounded out of their homes. They are currently scattered across three displacement camps in the South of Sri Lanka and enduring appalling conditions.

Most of the refugees are Muslims from Pakistan and Afghanistan, but they also include Christians. Many, like the Ahmadiyya from Pakistani, fled to Sri Lanka due to persecution they faced in their own countries.

Right now, they are in dire need of humanitarian relief. But they also need those in power to act and provide them with sustainable solutions. That is why I am calling on you, my elected representative, to take all the steps within your power to help them.

Specifically, we are asking you to:

Further information about the situation of the refugee population, and what can be done, is available in this briefing from Human Rights Watch and in this letter from Amnesty International.