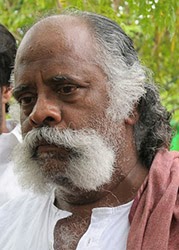 UPDATE: Good news! Jayapalan has been released. He has been deported, bizarrely enough to Turkey, but he has been able to make his way back to Norway.

Shanmugampillai Jayapalan, famously known as VIS Jayapalan in the Tamil literary world, was born in Uduvil, Jaffna in north of Sri Lanka. He began his writing in the 70s while studying at the University of Jaffna and published his first anthology in 1986. Since then he has published at least 12 anthologies of poetry and short novels. As the war escalated, he fled Sri Lanka in 1988 and was granted asylum in Norway. Since then he has been living in Norway as a Norwegian citizen.

His poetry and short novels are among the prescribed text books in many universities and colleges in Tamil Nadu. In 1995, he was awarded as the best immigrant writer by the Norwegian Writers Association. His poetry has been translated into English, Norwegian as well as to Sinhala. In 2009, some of his poems were translated into English and published as a book in Canada – named ‘Wilting Laughter’ – along with selected poems of two other prominent Tamil poets.

In 2011, he received a Special Jury Award for the role he played in the South Indian movie ‘Aaduka’lam’ at the 58th National Film Awards of India.

On the 9th of November, 2013 Jayapalan went to Sri Lanka. He had not visited the country since 2006. As a Tamil literary stalwart, he was interviewed by Tamil newspapers in Jaffna and was warmly welcomed by his community..

On the 22nd of November, he went to visit his ancestral home is in Vattakkadu, close to Mankulam in the northern province. He was hoping to visit his mother’s grave as he couldn’t attend her funeral when she passed away in November 2006. On his way, he was arrested by the Sri Lanka police near the area known as Vannivilankulam around noon and was brought to Vavunia, 260 kilometres (162 miles) north of Colombo. Currently he is been held at the Police Station in Vavunia. He family has not been able to communicate with him and nothing much is known about his current status.

After his arrest, the Sri Lanka Police Spokesman has told the BBC Tamil Service, that he was arrested as he was ‘disrupting the ethnic harmony in the country.’ They have accused him for ‘violating the visa regulations’, though they have not provided any details about the allegations.

Mark your protest. Please send emails letters or faxes to: