Freddy Gamage, a journalist with whom the Sri Lanka Campaign has worked closely over the past 4-5 years, has been violently attacked. He remains at risk. 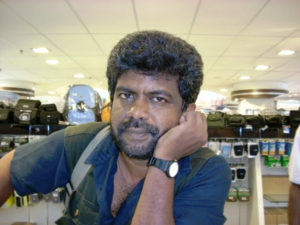 Freddy, a web journalist and convener of the Professional Web Journalists Association, has played a key role in exposing corruption in connection to Deputy Minister Nimal Lanza and his relatives, who have alleged links to the organised crime in Negombo.

Nimal Lanza’s brother Dayan, the Deputy Mayor of Negombo, appears to be linked to the attack. Shortly beforehand, Dayan Lanza had warned Freddy that god will punish him for his comments about the family, and mobile phone records suggest the primary suspect called Dayan 16 times on the day of the attack. Further, the police discovered that the father of Dayan and Nimal Lanza hosted a party for several police officers the night before the attack.

The attack occurred on 2 June in broad daylight. In his account of events, Freddy explained that he walked towards his car at around 12.15pm, after covering the Negombo Municipal Council’s monthly meeting, when he saw two people in full face helmets and raincoats on a bike without number plate.

One of them jumped towards him and assaulted him with a wooden pole, hitting him on the head. As he started running, one of the attackers kept shouting to the other “hit the fellow”. Freddy escaped and was hospitalised for his head injuries.

Two of his attackers were arrested within 48 hrs and police called an identification parade, which took place on 21 June. After the parade, one of the main suspects made a threatening remark to Freddy, saying “let’s meet”, as he made his way to the court. The next court hearing will be held on 28 June.

Prime Minister Ranil Wickremesinghe promised an “immediate investigation.” But this attack is part of a broader pattern.  Sri Lanka has a torrid record when it comes to protecting journalists and while harassment of journalists has reduced, it has not stopped entirely: Uthayan newspaper and its journalists continue to report harassment and in January an exiled Tamil journalist was arrested upon his return to the country.

Worse still is the chilling effect on media freedom engendered by Sri Lanka’s culture of impunity – the very same culture of impunity which no doubt reassured and emboldened Freddy’s attackers. As a consequence of the large number of journalists and media workers that have been murdered by perpetrators who have still not been brought to justice (43 in a 6 year period according to JDS), Sri Lanka is still number 6 in the world on the Committee to Protect Journalist’s ‘impunity index’. High profile investigations into some disappearances and murders, such as those of Prageeth Eknaligoda and Lasantha Wickramatunge, have commenced but have been beset by delays. The overwhelming majority of attacks remain completely uninvestigated

Those who attacked Freddy Gamage may now face justice, but if those who orchestrated his attack do not, then it will confirm many journalists’ suspicions that Sri Lanka’s culture of impunity remains intact.