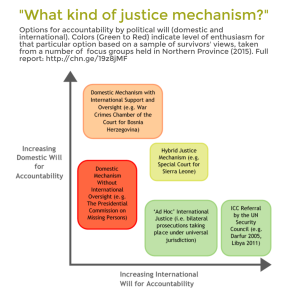 In March 2015 we launched a report, “How can we have peace?”, which communicated the views and expectations of survivors of Sri Lanka’s civil war when it comes to an effective reconciliation process.

The report, available here, was based on 19 focus groups, each comprising Tamil family members of individuals who were “disappeared” during the final stages of the war. All these focus groups took place after the change of Government. Since then, a further seven focus groups have been conducted, two with Tamil groups and five with Muslim war survivors. In total around 250 people were consulted. Further such studies involving Sinhalese families affected by the war are in planning, but have not yet taken place. This work will inform an update to our previous report, to be released later this year.

In the meantime, this blog provides a summary of the March 2015 report, augmented by analysis of the new material and discussions with Sinhalese facilitators who have worked with directly affected Sinhalese individuals.

The need to find their missing family members

The primary need – overwhelmingly and unanimously expressed in the focus groups – was to find out what had happened to the disappeared. Survivors were willing to make every other consideration secondary to this one. This need was given equal priority by Muslim focus groups and by family members of missing Sinhalese persons. Both Tamil and Muslim focus groups have interacted with the Presidential Commission on Missing Persons and found these interactions to be entirely unsatisfactory. There continues to be strong mistrust of the current Sri Lankan Government’s ability to deliver justice, which has carried over from the previous to the current administration, and a clear demand for international involvement. Many survivors said they would not accept that their loved ones were dead until this was corroborated by an appropriate independent mechanism.

The need for justice

Tamil survivors of the war are determined that at least some senior individuals be held to account for the war crimes that took place in the final stages of the war. When asked who they would like to see in court, the five names that came up most often were: former President Mahinda Rajapaksa, former Defence Secretary Gotabaya Rajapaksa, former Commander of the Armed Forces Sarath Fonseka, Colonel Karuna (Vinayagamoorthy Muralitharan – an Eastern Province warlord who fought on both sides), and Pillayan (Sivanesathurai Chandrakanthan – an associate of Karuna).

Muslim survivors agreed that Karuna and Pillayan should be prosecuted. They also wanted justice to be served against other surviving senior LTTE members, such as KP (Selvarasa Pathmanathan) and Iniya Bharathi (K. Pushpakumar). Sinhalese people directly affected by the war also firmly feel that former LTTE members should stand trial.

The need for a process with a strong international element

The complete lack of trust in the Sri Lankan Government displayed by Tamil and Muslim survivor communities means that both groups wholly reject the idea of an entirely domestic accountability and justice mechanism.

There was, however, reasonably strong support for the idea of international and impartial domestic actors working together on a process based in Sri Lanka. There were also concerns. The victims strongly felt that their direct participation was a precondition for a meaningful process, and that those involved must be able to speak Tamil. Additionally, it was repeatedly stressed that the complete lack of trust in domestic processes, the ongoing intimidation of (and risk to) witnesses, and the systemic bias of the legal and security sectors, means that international actors would need to play a strong role in proceedings and that firm monitoring would be needed. Muslim groups in the East were particularly supportive of this idea as they felt that a both a fully domestic and a fully international mechanism would be likely to fail to consider their community’s concerns.

Other Tamil survivors felt that they could never have any faith in any domestically-led process – it would need to be wholly international to have their confidence. This remains an ongoing cause for debate among Tamil survivors. An international process remains largely unpopular within the wider Sinhalese community.

The need for witness protection

Tamil and Muslim survivor groups stressed that it would not be safe for them to take part in any sort of process if the Sri Lankan military or police were responsible for witness protection, as they would not be safe to name perpetrators in such a setting. Strong, independently-led, witness protection was seen as a precondition for their testimony. Facilitators stressed the need for a reliable, internationally endorsed information package to be created, based upon which victims can make an informed decision on if and how to interact with a judicial process.

Survivors from all communities remain deeply skeptical on the idea of reparations, which they see as a quid pro quo for their silence and for the issuing of death certificates that preclude satisfactory closure of missing persons cases. Many individuals were also concerned about bribery and corruption. All communities firmly expressed the need for abuses to be acknowledged, for apologies and for guarantees of non-recurrence – by the Sri Lankan Government in particular, but also by those seen as responsible for the behaviour of the LTTE.

Trust-building exercises such as demilitarisation, the return of seized land, and the abolition of the Prevention of Terrorism Act and the freeing of detainees held under it were highlighted by Tamil and Muslim groups. Institutional and security sector reform was also raised, with Muslim groups particularly stressing the need for security to be reestablished. Tamil groups indicated they had more trust in civil institutions such as the police than the army, but little in both; Muslim groups indicated very little trust in any of the institutions of the state.

Survivors in their own words:

“First off, even before clearing the military from the villages,
the new government has to tell us what happened to our children.”

“There should necessarily be punishment for the responsible
persons who committed war crimes in the last days of the war.
Only if this happens will there be pressure on the future
generation not to follow the same tracks. Be it the president,
minister or army commanders – they need to be punished.”

“We will not trust anything that involves the government.
Because of this we want the UN [to be] involved.”

“We think the best would be this option [a mechanism that
involves both local and international representatives] but if
this includes people who were part of previous inquiries then
it will not work.”

“There should be people from this government who the international
community can trust to be part of this – people who provide
judgments without partiality should be included.”

“Our safety must be ensured in order for us to take action. If
safety is guaranteed, then I will go and point out the
responsible person. Protection is not only for me. My child
needs it, my mother and my siblings need it. We need protection
for all our relatives.”

“If it is a police or a CID inquiry it will be the end of us.”

“Whatever such a mechanism looks like, it should be people who
actually speak our language. People who speak Tamil.”

“I feel that it would be good if locals and the foreigners would
look into our issues together.”

“Since there is no proper monitoring progress is not happening.
When interference [sic] comes from outside, it can be done with
ease.”

“Punishment must be given for others to learn that they must
not do this.”

“Forgiving is a must for [us] Muslims. We will forgive them
[supporters of the LTTE]. However they must apologise.”