Webinar: The Quest for Justice, Rule of Law & Democratic Rights

The Sri Lanka Campaign co-hosted a webinar on Friday 12 February with the Global Tamil Forum, Canadian Tamil Congress and the Centre for Justice and Human Rights at New York University. Moderated by our Campaign Director, Melissa Dring, there were eight panellists with legal, diplomatic, academic, and activist backgrounds, internationally and in Sri Lanka: Charles Petrie, Pablo de Greiff, Bhavani Fonseka, Ameer Faaiz, Ambika Satkunanathan, Shreen Saroor, Stephen Rapp, and M. A. Sumanthiran. You can watch the recording of the webinar and read our reflections below.

A Pandemic of Impunity

What hit hard and featured in every panellist’s presentation was the culture of impunity running through every facet of Sri Lankan politics and society. Some speakers – Pablo de Greiff, M. A. Sumanthiran and Stephen Rapp in particular – spoke to this on an institutional level, highlighting years of noncompliance from the Sri Lankan government with human rights norms and resolutions, as well as the lack of independence of the judiciary and the refusal to address accountability for alleged war crimes. Rapp shared a particularly disturbing anecdote – that has since been widely picked up in the press – of a meeting with Gotabaya Rajapaksa where the former Defence Secretary told him, “I killed them, I killed them”, referring to the execution of LTTE prisoners at the end of the war, rather than pursuing due process.

The way this culture of impunity bleeds into everyday life was elucidated in Shreen Saroor and Ameer Faaiz’s stories of hate speech and discrimination against religious minorities, in particular Muslims, in the past decade. In recent times the discriminatory policy of forced cremations has caused further anguish to families already hit by the death of a loved one. Ambika Satkunanathan and Bhavani Fonseka highlighted the surveillance and intimidation of civil society, which has worsened since Gotabaya’s election in 2019, particularly in the North and East.

This culture of impunity sets the stage for cycles of violence and all speakers agreed that Sri Lanka is on a deeply concerning trajectory. The Sri Lankan government claims that it will pursue domestic accountability mechanisms and has rejected international engagement through the UN. Pablo De Greiff and M. A. Sumanthiran both spoke separately about the fact that even the previous government which signed up to resolutions at the HRC did not take them seriously and had no intention of following through on promises. According to M. A. Sumanthiran, this was very clear to all those in Sri Lanka as the government promised its support base that there would never be international interference. Given this culture of impunity and repression, and history of noncompliance, it is abundantly clear that a domestic mechanism cannot be taken seriously. Activists and NGOs are calling on members of the Human Rights Council to reject the government’s assurances and instead support a strong resolution that makes clear that the international community sees the government’s promises for what they are – another attempt to buy time and escape accountability.

Speakers agreed that the UN had failed in its engagement on Sri Lanka thus far. But what actions can the UN take now? The question of UN action was a common thread, right from Charles Petrie’s opening presentation. Petrie was emphatic that UN failures have not been due to lack of tools, but lack of political will and courage. Stephen Rapp emphasised that the UN should see no conflict between human rights and its other focuses and must integrate a human rights centric approach across its activities.

There is a mistrust and a weariness among victim-survivor communities with international approaches, given the lack of meaningful change almost twelve years since the end of the war. Further, the credibility of the UN and the Human Rights Council is at stake across the board. A number of the speakers warned of “a pandemic of impunity” across the world if Sri Lanka is not held to account. The speakers agreed that international interventions should not be seen as an attack on Sri Lanka, but rather an effort to support every Sri Lankan to live and thrive, and must be welcomed for that. Stephen Rapp spoke of international solidarity and empathy with those suffering at the very core of being human. 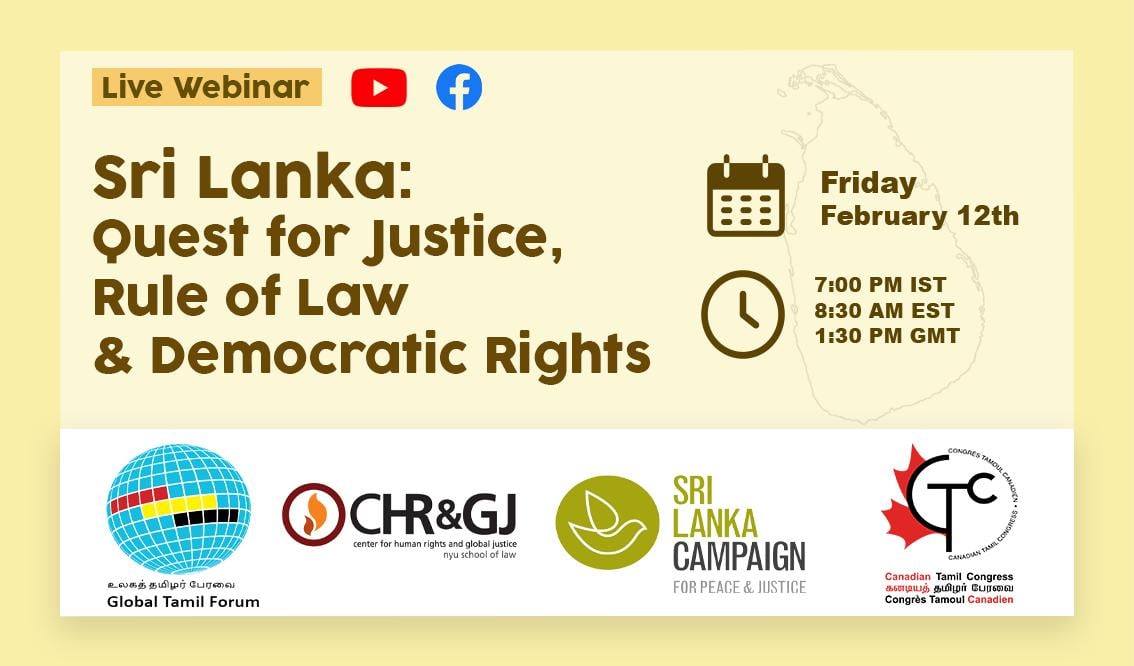