Earlier last week, the Parliamentary Commissioner for Standards issued a damning report on the conduct of UK MP Ian Paisley Jr in relation to his dealings on Sri Lanka. It follows an investigation into allegations, originally published in the Telegraph newspaper, that the MP failed to disclose details of two luxury all-expenses-paid family holidays to Sri Lanka in 2013 – after which he had proceeded to lobby the British government on behalf of his generous hosts. In a letter in March 2014, Paisley urged then Prime Minister David Cameron not to support an international probe into mass atrocities carried out during the Sri Lankan civil war.

Among the report’s key conclusions are that Paisley:

The report goes on to state:

“These two visits to Sri Lanka provided a very substantial personal benefit to Mr Paisley and his family. I find it surprising that such an experienced MP did not ask himself whether it was proper to accept such benefits from a foreign government. I also find it surprising that he did not realise that, if accepted, these benefits would call into question his impartiality when he next spoke about the affairs of that government.”

As a result of the Commissioner’s findings, Paisley faces suspension from the UK House of Commons for 30 sitting days, the longest ever on record. Should a ‘recall petition’ triggered by the suspension receive the support of 10% of his constituents, the MP could also lose his seat and face a by-election. 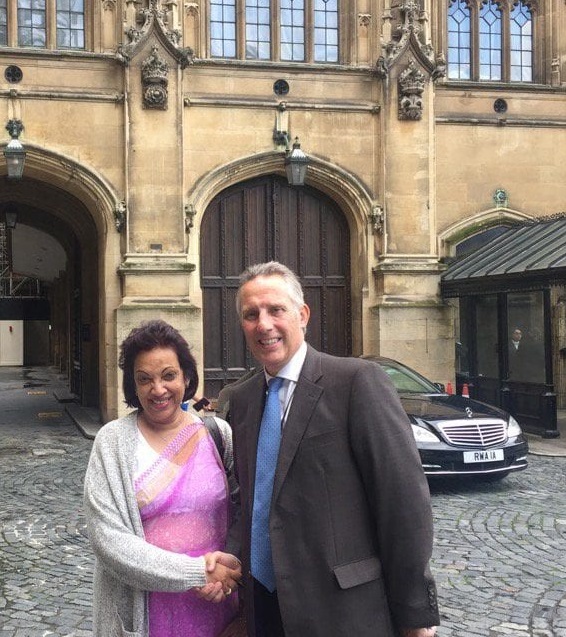 Paisley is not the only individual in Westminster to have vigorously opposed war survivor demands for a credible process of justice and reconciliation in recent times. As we reported on earlier this year, it is an endeavour that has also been enthusiastically championed by another Parliamentarian, Lord Naseby, who has sought to cast doubt and spread disinformation about the scale of war-time atrocities in 2009.

While there is no suggestion that Naseby has fallen foul of Parliamentary standards, either in registering or declaring his interests, many will rightly be asking questions about the scale of the benefits that he has received from the government of Sri Lanka in in the past few years – given his energetic efforts to deflect international scrutiny of the war and given what we now know about the gold-plated nature of Paisley’s visits.

While House of Lords register of interests does not (unlike the Commons register) reveal information about the precise costs incurred during foreign trips, it does show – as we document here – that Naseby has visited Sri Lanka ten times since 2002, with many of his expenses, including flights, hotels, and local travel, being borne by the government of Sri Lanka.

Incidentally, a Sri Lankan journalist recently made a Right to Information (RTI) request to the Sri Lankan Ministry of Foreign Affairs (MFA) asking them to provide details of Naseby’s expenditure over the past decade and a half. Curiously, the MFA’s response featured only details of a single visit in 2012 – which included use of a chartered air force helicopter for the sum of 1.2 million LKR – with no explanation as to the omission of the years.

A breakdown of expenses for Lord Naseby’s 2012 visit to Sri Lanka, as disclosed by the Sri Lankan Ministry for Foreign Affairs following an RTI request.

Until the government of Sri Lanka or Lord Naseby volunteers this information, the total figure of costs borne by the Sri Lankan public is likely to remain unknown. The Sri Lanka Campaign has written to Lord Naseby asking him to share, in the interests of transparency, the full details of his expenses in relation to the remainder of his visits.

Parliamentary procedures matter. But so do personal principles.

The procedural rules of Parliament aside, at the heart of the matter – in the case of both Paisley, Naseby, and others – is the basic morality of politicians accepting benefits from a government accused of serious human rights violations, at the same time as conducting lobbying in support of that government to refute those accusations. Whether or not an interest has been properly registered or declared in accordance with the rules of Parliament is arguably a secondary concern to the underlying fact that there are individuals in the UK Parliament who have defended, and who continue to defend, the Sri Lankan state’s shameful war record while receiving personal benefits from it. This a point that risks being overlooked in the wider media coverage of the Paisley scandal.

While last week, quoting the prophet Isiah, Paisley read a statement in the Commons expressing regret and remorse for his actions, strikingly absent was any apology for the tens of thousands of civilian victims who continue to be denied justice for appalling abuses carried out at the end of the war[1]. Perhaps now would be the time for him, and others in Parliament who have sought to deflect the call for accountability in Sri Lanka, to reflect upon another of the prophet Isiah’s proclamations: “Cease to do evil. Learn to do right. Seek justice. Defend the oppressed.”

[1] Somewhat oddly, given his apparent contrition having been exposed, Paisley is reportedly “still contemplating” suing the Daily Telegraph for its “sensational reporting”.