Words in need of actions: Sri Lanka at the Human Rights Council and beyond

Last Friday, the Office of the UN High Commissioner for Human Rights (OHCHR) released its long awaited written update on Sri Lanka – a review of the government’s progress in implementing its commitments on accountability, reconciliation and human rights, as agreed in October 2015 under UN Human Rights Council resolution 30/1. The report pulls few punches, making clear the enormous gulf between what was promised and what has been delivered, and underscoring the need for continued international pressure and engagement. Ahead of a critical meeting at the Council in two weeks’ time (22 March), during which a further resolution – currently being negotiated – is expected, we ask: what next? And what lessons can be learnt from the experience of the past 18 months? 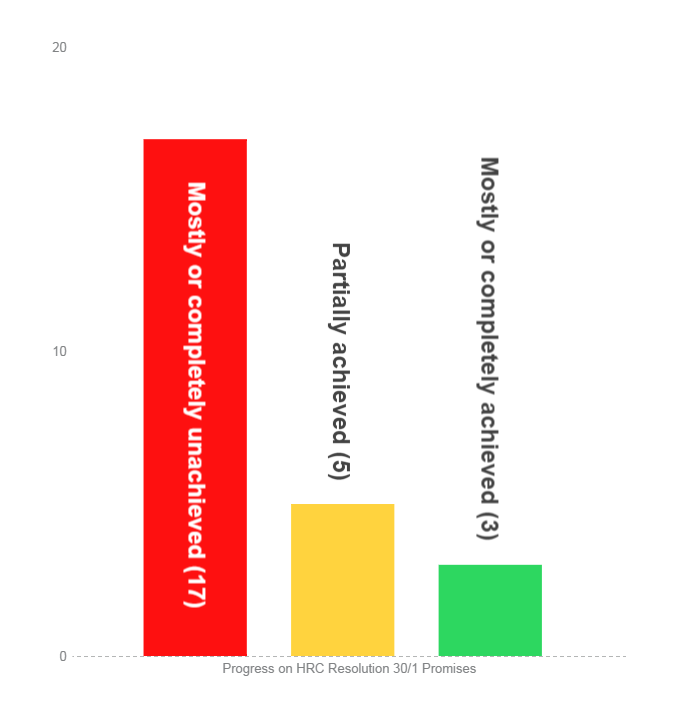 In February, an evaluation by the Sri Lanka Campaign found that the government of Sri Lanka was falling seriously short on the promises that it made on justice and reconciliation in October 2015. A breakdown of the text of Resolution 30/1 revealed that it had lived up to its word on a mere three pledges, with seventeen largely or wholly unimplemented, and a further five only partially achieved. The OHCHR report corroborates and confirms these findings, with expressions of praise and concern mapping closely with our tally.

While welcoming the government’s progress in several areas, in particular the spirit of constructive engagement with OHCHR and the completion of a consultation process with victims, the report cites a plethora of shortcomings across a range of issues. These include, among others, serious concerns about the ongoing use of torture; the continued harassment and surveillance of human rights defenders and victims; unfulfilled promises to return military held land and establish an Office on Missing Persons; the continued operation and use of draconian anti-terrorism laws; and, crucially, the failure to establish an independent judicial mechanism to bring about accountability for serious crimes. A reminder of the pressing rationale of the last of these commitments is provided by the arms length list of ‘emblematic cases’ which the report cites – the lack of progress upon which, it concludes, “only strengthens the case for the case for the establishment of a specialized court to deal with system crimes, staffed by specialized personnel and supported by international practitioners, as recommended by the Consultation Task Force in its final report” [emphasis added].

On a more general note, the report finds that the various of bodies tasked with taking forwards the reconciliation agenda “are yet to present a sufficiently convincing or comprehensive transitional justice strategy to overcome the legacy of mistrust and scepticism left by a number of inconclusive ad hoc commissions”. It goes on to state that “stronger, tangible results need to be forthcoming without further delay” and recommends that that the government “set out a clear plan of action” to implement its outstanding commitments.

In terms of the frank appraisal of Sri Lanka’s recent progress that is needed – so far, so good. But what are the prospects for turning the report’s findings and recommendations into a blueprint for action on 22 March? Earlier in the year, in a speech delivered by Foreign Minister Managala Samaraweera in London, the government of Sri Lanka signaled to the international community it’s openness to a ‘technical rollover’ resolution – a short procedural text that would keep its October 2015 promises in play for a further period of monitoring and scrutiny by the OHCHR and the Human Rights Council.

Recent reports however, have cast doubt on the solidity of that assurance, with suggestions that the government may be seeking to water down core commitments – in particular its pledge to establish a judicial mechanism, with the participation of “Commonwealth and other foreign judges, defence lawyers and authorized prosecutors and investigators”, to investigate allegations of serious human rights violations. As affirmed by the ongoing failure of ordinary judicial processes to provide redress for victims, and the conclusions of the recent consultation on transitional justice, such a step remains indispensable for an accountability process which has the confidence of victims and is capable of tackling Sri Lanka’s entrenched culture of impunity.

A recent draft of the resolution currently being negotiated by Sri Lanka and members of the Council (seen by the Sri Lanka Campaign) suggests that this goal is yet to be conceded to the government. But in light of some concerning political dynamics at the Council, and the apparent softening of positions on Sri Lanka, key states leading the drafting process must remain steadfast in their commitment to a justice mechanism, whose credibility is guaranteed through significant international involvement. A watering down of this key clause would represent a major betrayal of war survivors who have consistently demanded it, and a denial of the very serious crimes which gave rise to it in the first place.

There are several additional areas in which members of the Human Rights Council, and in particular the UK, can and must use their influence to strengthen the text.

First and foremost, the resolution must welcome and endorse the report of the Consultation Task Force on transitional justice. This was a historic process, unprecedented in terms of its claim to articulate, credibly and comprehensively, the needs and wishes of Sri Lanka’s war affected communities. The Human Rights Council must help empower it to become the catalyst for change that many had hoped – but has thus far been resisted by the government of Sri Lanka – by giving due weight to its recommendations and findings, and ensuring the transitional justice agenda is framed in terms of it going forwards.

Second, the text must commit the government of Sri Lanka to developing a timetable for the implementation of its outstanding commitments. Looking back over the past 18 months, it is clear that the failure to do so has provided cover for the government of Sri Lanka’s open-ended interpretation of its obligations. Scheduling the delivery of commitments with transparent public benchmarks would provide focal points through which Sri Lanka’s citizens, civil society and the international community could hold the government to account on an ongoing basis. Moreover, it would help ensure that the four ‘pillars’ of transitional justice remain interconnected, and provide a shield against those who would seek to hive off the question of accountability and keep it on the backburner. Given that the forthcoming resolution is likely to establish a longer monitoring and reporting period than under 30/1 (18 months), with an oral update by OHCHR in March 2018 and a written update in March 2019 (24 months and 36 months respectively), it will be especially important that the path ahead is marked with milestones – and that the potential for promises to be kicked into the long grass is limited.

Third, the text must encourage implementation of the recommendations of the UN treaty bodies – such as the Committee Against Torture and the Committee on the Elimination of Discrimination Against Women – which have played a vital role in shining a light on ongoing patterns of rights abuses in Sri Lanka, and provided constructive and practical feedback on how to tackle them.

Finally, the text should acknowledge in an explicit manner the extremely limited progress made to date in the implementation of the commitments under 30/1, with language accurately reflecting the fact that the overwhelming majority of them are yet to be fulfilled.

A strong resolution on 22 March will be vital for ensuring that the government of Sri Lanka delivers on its commitments to war affected communities. Continued international monitoring, engagement and pressure still matters – indeed, perhaps more so than ever in light of the narrowing window of opportunity for meaningful reform. But the experience of the past 18 months, including the achingly slow pace of progress and the visible backsliding on key pledges, should prompt serious thinking about the limits to what promises made on paper at the Council can achieve alone. A conversation about the effectiveness of the international community’s current approach to supporting the delivery of a meaningful transitional justice process in Sri Lanka is long overdue and needs to start now.

The warm re-embrace of the government of Sri Lanka by key players in the international community over the past 18 months– often couched in terms of ‘constructive engagement’ and ‘positive partnership’ – is plainly failing to bring about the change that survivors demand, and which sustainable peace requires. The recent decision by the EU Commission to restore GSP+ trade privileges to Sri Lanka, in violation of its own criteria and with blatant disregard for the damning findings to the contrary by the UN Committees, is a case in point for the argument that far too much is being given away for far too little in return. 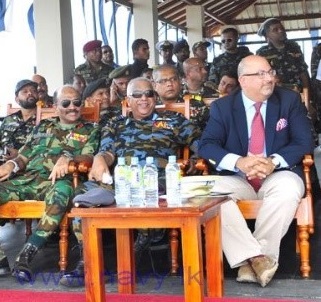 Such moves have been compounded by extremely weak political messaging. In November 2016, the UK Minister of State chose to use the platform resulting from their visit to provide a tacit endorsement of Sri Lanka’s plans to expand its peacekeeping operations – despite ongoing concerns about the total lack of impunity for past sexual violence among the military, and the absence of evidence of the vetting and punishment of past offenders. As recently as last week, the US Ambassador to Sri Lanka was photographed observing a military ceremony on illegally seized civilian land in Mullikulam. Meanwhile, questions persist over whether funding from the international community on issues such as de-militarization, land and security sector reform is being applied with sufficient transparency and teeth.

The raised expectations that followed the October 2015 resolution has today given way to bitter frustration, not merely about the pace, but also about the direction of change in Sri Lanka. This is particularly true among war affected communities in the North and East who have invested so much time, energy and hope into the current process, often against their own best instincts. The depth of feeling is underscored by the recent call from several individuals and groups to abandon the current Human Rights Council mandated process, and instead pursue a referral of Sri Lanka to the International Criminal Court via the UN General Assembly. Whilst that proposal requires further elaboration in order to show how the many obstacles to its attainment could be overcome, the international community must sit up and listen to the depth of feeling that it signifies.

War affected communities in Sri Lanka will not, and cannot, wait indefinitely for truth, justice and reconciliation. A re-affirming of those goals, and a renewed plan for achieving them, must begin with an agreement on a strong resolution text in two weeks’ time. But it will require much more than mere words from the government and international community in the months and years ahead.